Flames hope to ride momentum into matchup with Blackhawks 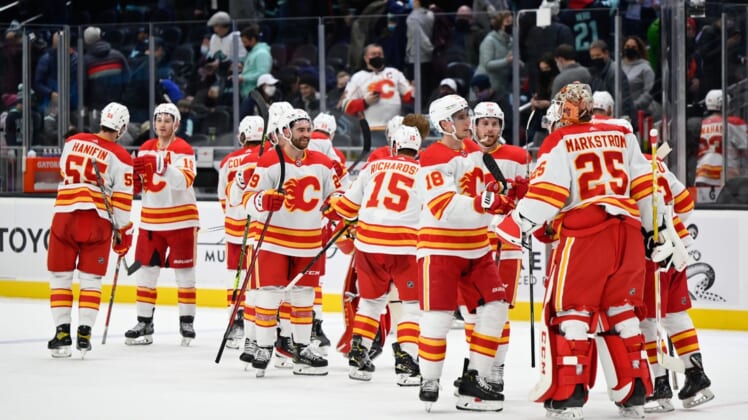 A layoff of nearly three weeks could have deflated the Calgary Flames.

Instead, the club persevered through a lengthy COVID-19 outbreak and shook off the rust with Thursday’s 6-4 win at Seattle.

Calgary will try to keep the momentum going Sunday when the Flames visit the Chicago Blackhawks in the second game of a five-game road trip.

“I think that we thought (Thursday) would be a lot better, but we found a way to win,” said the Flames’ Matthew Tkachuk, who tallied the go-ahead goal and two assists. “And that was the most important thing, getting back in the win column here.”

The Flames are set to play four games in five days beginning with their first trip to Chicago this season. The clubs were set to meet at the United Center on Dec. 13, but the game ultimately was postponed at the onset of Calgary’s outbreak.

Flames forward Elias Lindholm, one of the initial players to test positive for COVID-19 in early December, was among many players who felt that the act of getting back to game speed is the best way for the Flames to get reacclimated.

“Obviously, when you’ve been away — even if I didn’t have COVID and I was away for 19 days, I would feel kind of (crummy) as well,” Lindholm said. “If I don’t do anything for a couple days, it will catch up to me. But, yeah, I didn’t feel 100 percent, but I thought we grinded hard and tried to work as hard as possible — and that’s all that matters.”

Chicago suffered its third straight defeat on Saturday, falling 6-1 at Nashville. Playing for the first time in two weeks, the Blackhawks fell behind 3-0 after one period and surrendered a goal in the final minute of the first and another in the opening minute of the second.

“I was like, ‘Guys are ready to play.’ They were buzzing around. We had puck possession,” Blackhawks interim coach Derek King said. “I don’t think we played a really bad game. I liked our start. We had opportunities, we just couldn’t bury them. They had opportunities and they scored.”

With Blackhawks goaltenders Marc-Andre Fleury and Kevin Lankinen both in COVID protocols, Chicago turned to Collin Delia in net.

“It was fun to play,” Soderblom said. “I’ve dreamed about playing in the NHL (since) I was a kid. It was fun, but a tough game. I feel like I played pretty good, did a couple of good saves.”

Phillipp Kurashev scored for Chicago, which welcomed the return of Jujhar Khaira. In his first action since leaving a Dec. 7 home loss to the New York Rangers on a stretcher upon suffering an upper-body injury, Khaira registered three shots in 13:56 of ice time.

Calgary topped visiting Chicago 5-2 on Nov. 23. Tkachuk broke a 2-all tie with 5:35 left in the third period. Jacob Markstrom stopped 19 of 21 shots to outduel Fleury, who stopped 34 of the 37 shots he faced.