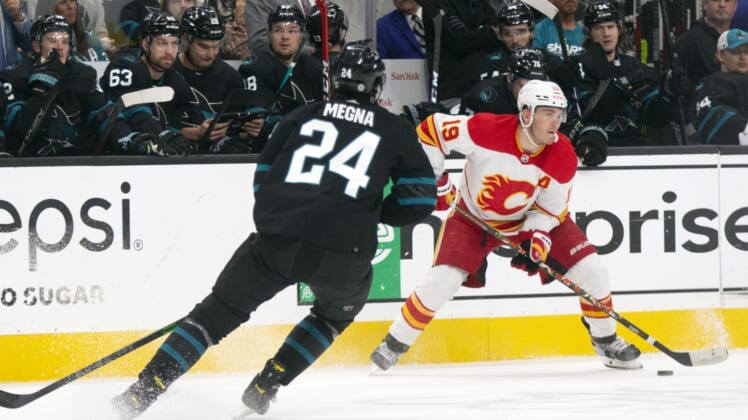 Matthew Tkachuk collected one goal and two assists and Elias Lindholm scored twice as the Pacific Division-leading Calgary Flames completed a sweep through California with a 4-2 victory over the San Jose Sharks on Thursday.

Trevor Lewis also scored for the Flames (43-19-9, 95 points), who have won three straight games and have a six-point lead on the Edmonton Oilers in the race for the division crown. Dan Vladar made 31 saves.

Nick Bonino and Logan Couture replied for the Sharks (29-32-9, 67 points), who are winless in their past five games and have just three victories in their last 12 (3-7-2). James Reimer stopped 32 of 35 shots before being injured midway through the third period. Kappo Kahkonen made five saves in relief.

Tkachuk equaled his career high with his 34th goal of the season, 7:19 into the clash. San Jose’s Timo Meier lost the handle at the blue line, and Tkachuk stole the loose puck and fired a top-corner wrist shot. The Flames have opened the scoring in a league-best 46 games.

Bonino replied with his 10th of the season seven minutes later, neatly redirecting with his skate Jaycob Megna’s point shot into the cage.

However, Lewis restored Calgary’s lead with 55 seconds remaining in the period. He raced down his off wing, swooped toward the net and tucked home the puck for his fifth goal of the season.

Lindholm extended the lead at 13:28 of the second period. After taking a drop pass from Tkachuk, he fired a bullet from inside the left circle.

Couture’s tally five minutes into the third period came when Meier’s pass banked off his leg and into the net for his 23rd of the season. But Lindholm scored into an empty net with 32 seconds remaining for his team-high 38th of the season.

Lindholm is the first Flames player to net 37 or more goals since Jarome Iginla scored 43 in 2010-11.