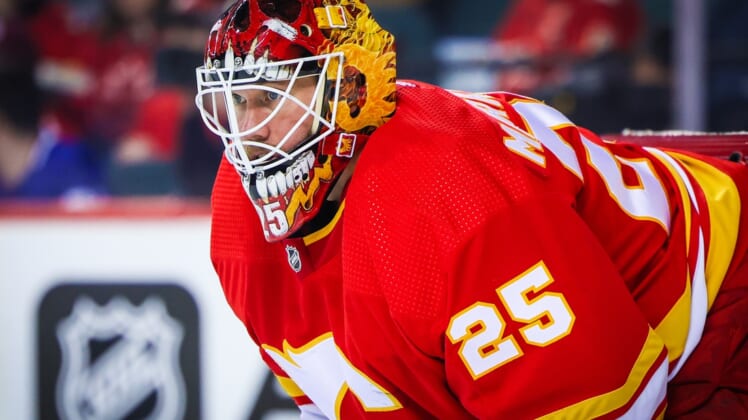 The Islanders’ reward in the second game of a back-to-back road set: A date with perhaps the hottest goalie in the NHL.

The Islanders will look to break through against Jacob Markstrom Saturday night, when New York visits the Calgary Flames for the first time in almost three years.

Anthony Beauvillier scored the Islanders’ lone goal Friday night, when Smith made 37 saves as the Oilers earned a 3-1 win in their first game under new head coach Jay Woodcroft. The Flames extended their winning streak to five games Thursday night, when Markstrom recorded a season-high 46 saves in a 5-2 victory over the visiting Toronto Maple Leafs.

The Islanders, who scored five first-period goals in a 6-3 win over the Vancouver Canucks in the opener of a four-game road trip Wednesday night, had plenty of chances against Smith, who was making just his ninth start of the year. The 38 shots for New York were its third-most of the season.

But Smith preserved a 1-0 lead by turning back Zach Parise to end a 2-on-0 opportunity for the Islanders early in the second. After Beauvillier scored on the power play to cut the Oilers’ lead to 2-1 with 4:56 left in the second, Smith maintained the one-goal advantage by stopping Casey Cizikas on a breakaway late in the period.

“Credit to Mike Smith – we had some breakaways, 2-on-0’s, and he came up with big saves tonight,” Islanders head coach Barry Trotz said. “There’s not that many negatives, other than the score.”

There have been few negatives lately for Markstrom or the Flames, who have gone 9-6-0 since Jan. 1 while recording six wins by at least three goals. Markstrom has started all five games in Calgary’s winning streak, a span in which he’s gone 4-0 while stopping 135 of 142 shots. Markstrom was pulled after giving up three goals in two periods in what ended up being a 4-3 win over the Dallas Stars on Feb. 1.

Markstrom’s 19 wins are just nine shy of his career high, set when he made 60 starts for the Canucks in 2018-19. And his NHL-leading eight shutouts are as many as Markstrom recorded in 299 career starts entering this season.

“‘Marky’ once again played great for us, made some big saves, but I thought we played a good game,” Flames defenseman Noah Hanifin said after scoring a goal and collecting an assist Thursday night. “I think we did some really good things.”

The Islanders last visited the Flames on Feb. 20, 2019, when Austin Czarnik and Johnny Gaudreau scored 29 seconds apart early in the third period to spark the hosts to a 4-2 win. New York was slated to play Calgary in the second game of a four-game road trip March 12, 2020, but the NHL season was paused hours before faceoff due to the pandemic.