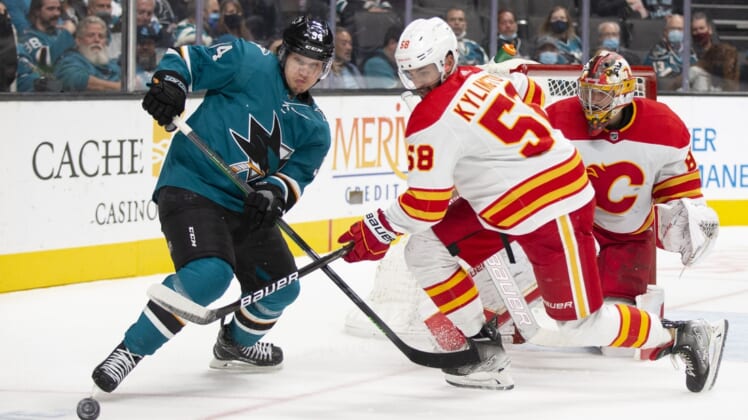 After a set of line shuffles revived the Calgary offense, it remains to be seen how the Flames will deploy their forwards against the visiting San Jose Sharks on Tuesday.

Scoring hasn’t been much of a problem for the Flames all season, yet Calgary had been shut out twice in three games heading into Saturday’s road date with the Vancouver Canucks. In response, Flames head coach Darryl Sutter completely rearranged his four lines, and the result was immediate.

The Flames posted a 5-2 win over the Canucks, scoring the game’s first five goals and outshooting Vancouver by a 44-25 margin. Matthew Tkachuk led the team with a goal and two assists, but contributions came from all over the lineup, as nine Calgary players collected at least one point.

Despite this outburst, Sutter was non-committal about the idea of sticking with the new lines, implying that it might have been a temporary move “to see if we’d get something” going.

“Haven’t had much scoring lately (in 5-on-5 play) out of our goal-scorers, (to be) quite honest,” Sutter said. “Very few chances, other than odd-man situations or that sort of thing. … I think sometimes you’ve just got to freshen it up a little bit. It can get a little stale.”

These are the types of experiments a team can conduct when it has a comfortable lead, as Calgary entered Monday eight points ahead of the Los Angeles Kings in the Pacific Division standings. With their eyes firmly aimed at a Stanley Cup run, the Flames are looking for the ideal roster mix heading into the playoffs.

The Flames made one more minor addition before Monday’s trade deadline, adding forward Ryan Carpenter from the Chicago Blackhawks for a fifth-round pick in the 2024 draft.

It’s a different story for the Sharks, who are second-to-last in the Pacific and realistically out of the postseason hunt. San Jose traded away forward Andrew Cogliano and defenseman Jacob Middleton in separate deals on deadline day, though they also picked up goalie Kaapo Kahkonen from the Minnesota Wild in exchange for Middleton.

San Jose is coming off the momentum of a stirring 4-2 win over the Arizona Coyotes on Sunday. After Lawson Crouse’s power-play goal gave Arizona a 2-1 lead at 15:09 of the third period, Timo Meier equalized just 22 seconds later, and Noah Gregor tallied the go-ahead goal at the 16:15 mark.

“The good part about it is we found a way. We had a good last four minutes. … We found a way to win where lots of times this year it’s been the opposite,” Sharks coach Bob Boughner said.

Sharks forward Jonathan Dahlen is questionable to face the Flames after leaving Sunday’s game after being hit by a stray puck.

James Reimer has started three of four games since returning from a lower-body injury, and figures to be back in the Sharks’ net on Tuesday.

Jacob Markstrom is the Flames’ probable starter. Markstrom has an outstanding 2.06 goals-against average and .928 save percentage this season, and the goalie has suffered just one regulation loss (14-1-2) over his last 17 decisions.

Despite the gap in the standings, the Sharks have had Calgary’s number dating back to the 2016-17 season. San Jose is 11-3-0 in its last 14 games against the Flames, including wins in their first two meetings this season.