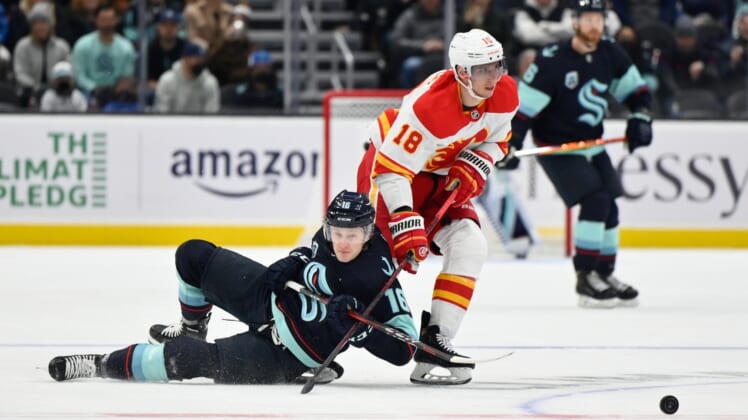 Matthew Tkachuk scored the go-ahead goal with 2:26 left in the third period as the Calgary Flames, playing their first game since Dec. 11, defeated the host Seattle Kraken 6-4 Thursday night.

Mark Giordano, playing his first game against the Flames after spending 15 seasons in Calgary, had a goal and two assists for the Kraken. Calle Jarnkrok added a goal and two helpers, Jared McCann had a goal and one assist, and Yanni Gourde also scored. Chris Driedger stopped 34 of 39 shots as Seattle lost for the second night in a row and fell to 0-3-1 in its past four games.

It was a wild finish after the score was tied at 3-3 with less than 3 1/2 minutes remaining.

Mangiapane broke the tie with a power-play goal at 16:51.

The Kraken responded 30 seconds later, with McCann tipping Giordano’s shot from the point past Markstrom.

The Flames regained the lead as Tkachuk put a low wrist shot from the high slot through a screen and Driedger’s pads. Hanifin added an empty-net goal with 20 seconds remaining to clinch the victory.

Giordano, selected by Seattle in the expansion draft, opened the scoring at 5:48 of the first period, putting a wrist shot past Markstrom from the high slot.

Gaudreau tied it at 9:46 of the period, taking a cross-ice pass from Nikita Zadorov and beating Driedger with a one-timer from the left circle.

Seattle regained the lead just nine seconds into the second period as Jarnkrok crashed the net on a power play and knocked a rebound of McCann’s shot past Markstrom.

Gaudreau tied the score again at 3:54 of the second on a power play. He corralled the puck in the right wing corner and circled back before putting a wrist shot into the upper corner of the net.

Lucic gave the Flames their first lead at 14:56 of the second. Christopher Tanev intercepted a clearing attempt at the right point and sent a cross-ice pass to Lucic, who scored on a wrister from the left circle.

The Kraken tied it at 4:59 of the third on a three-on-two breakaway. Gourde skated to the top left of the crease and tipped Colin Blackwell’s pass into the open side of the net.