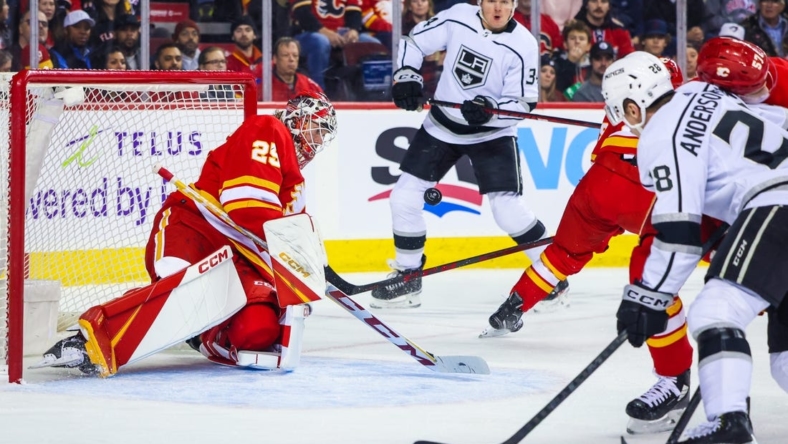 Tyler Toffoli and Elias Lindholm each had a goal and two assists for the Calgary Flames in a 6-5 win against the visiting Los Angeles Kings on Monday night.

Adam Ruzicka had a goal and an assist, and Jacob Markstrom made 24 saves for the Flames, who have won two in a row following a seven-game losing streak.

Arthur Kaliyev scored two goals, Kevin Fiala had a goal and an assist, and Jonathan Quick made 23 saves for the Kings, who came in riding a four-game winning streak.

The Flames scored four goals on their first eight shots against Quick to build a 4-2 lead in the first period.

Jonathan Huberdeau scored off a feed from behind the net from Rasmus Andersson to give Calgary a 1-0 lead at 3:49.

The Kings were on a power play when Kaliyev scored on a one-timer from the right circle to tie it 1-1 at 4:53.

Kaliyev scored again at 6:11 when he recovered a rebound near the goal line and scored from a sharp angle to give Los Angeles a 2-1 lead.

The Flames tied the score 2-2 at 10:55 when Nazem Kadri’s shot hit Milan Lucic and went to the side, where Andrew Mangiapane was waiting to shoot the puck in the net.

Brett Ritchie gave Calgary a 3-2 lead at 11:37 when he forced a turnover in the Los Angeles zone, passed it to Blake Coleman and got it back for the tap in goal.

Lindholm scored another power-play goal for the Flames to stretch the lead to 5-2 at 1:51 of second period.

Anze Kopitar cut it to 6-4 with a wrist shot at 8:57 of the third, and Adrian Kempe scored with Quick pulled for the extra attacker to make it 6-5 with 1:19 left.