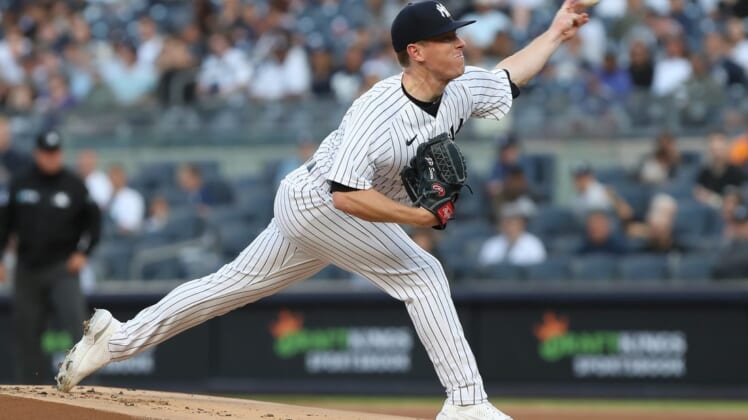 JP Sears pitched five effective innings in his first career start and combined with four relievers on a five-hitter as the New York Yankees beat the Baltimore Orioles 2-0 Wednesday night at Yankee Stadium after putting two more players on the injured list.

The Yankees won for the 13th time in 19 games during a stretch of playing 23 games in 22 days and did so after putting Giancarlo Stanton (strained right calf) and Jonathan Loaisiga (right shoulder inflammation) on the injured list shortly before the game.

Sears held the Orioles hitless in seven at-bats with runners in scoring position and stranded four runners in the opening two innings.

After Cedric Mullins and Trey Mancini walked and reached on an error, respectively, Sears ended the first by getting Ryan Mountcastle on a called third strike. He gave up a single to Adley Rutschman and issued a one-out walk to Rougned Odor but ended the second by whiffing Mullins.

Miguel Andujar had two of New York’s six hits and hit an RBI single that scored Aaron Judge with the first run in the fourth. Gleyber Torres scored on a throwing error by catcher Rutschman when Andujar stole second during an at-bat to Joey Gallo.

Baltimore’s Tyler Wells (1-4) allowed two runs on five hits in five innings. He struck out two and walked none in a 77-pitch outing.

Rookie Ron Marinaccio followed Sears with two hitless innings, before Lucas Luetge and Miguel Castro combined on a hitless eighth. Clay Holmes allowed two hits in the ninth before getting his fifth save and extending his scoreless streak to a career-high 23 innings and completing New York’s fifth shutout of the season.

Rutschman singled twice as Baltimore fell to 4-9 in the season series with the Yankees and was blanked for the third time this year.