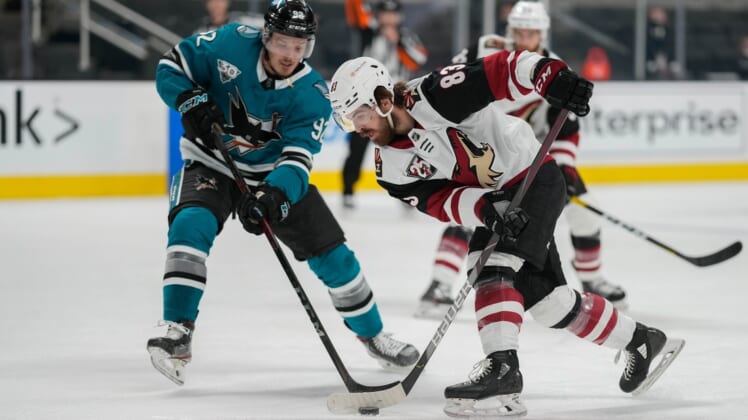 Phil Kessel scored the go-ahead goal for the Arizona Coyotes, who came from behind and scored five unanswered goals to beat the host San Jose Sharks 5-2 on Friday night.

Victor Soderstrom and Jan Jenik each scored their first career goal for Arizona, with Jenik accomplishing the feat on an empty-netter to cap his NHL debut. Soderstrom was playing his third NHL game.

Conor Garland collected a goal and two assists while Michael Bunting also found the net for the Coyotes (23-26-6, 52 points). Darcy Kuemper made 26 saves in the win.

It appeared that Karlsson scored his second goal on the evening in the third period, which would have tied the game at 3-3. However, Arizona challenged the goal as being offside and prevailing, preserving its lead.

Karlsson scored his eighth goal of the season as the Sharks went ahead 1-0 at 3:47 of the first period.

Meier doubled the margin with a cross-ice shot that went off the bar and in at the 3:30 mark of the second period.

Soderstrom cut the gap in half just 1:29 later.

The Coyotes got a five-on-three opportunity with the Sharks’ Brent Burns (slashing) and Tomas Hertl (high-sticking) in the penalty box in the middle of the second period. Garland converted to tie the game 2-2 at 11:05.

Kessel got two opportunities on breakaways and converted on the second attempt, beating Korenar at the 4:53 mark of the third period to give the Coyotes their first lead of the game, 3-2.

Bunting added to Arizona’s lead at 9:57 off Garland’s second assist of the night.

Jenik’s goal came one second remaining. Kessel was credited with one of the assists to give him a two-point night.

The two teams, both already eliminated from playoff contention, face off again Saturday night in San Jose. That contest will be the season finale for the Coyotes, while the Sharks have another game left, Wednesday against the visiting Vegas Golden Knights.