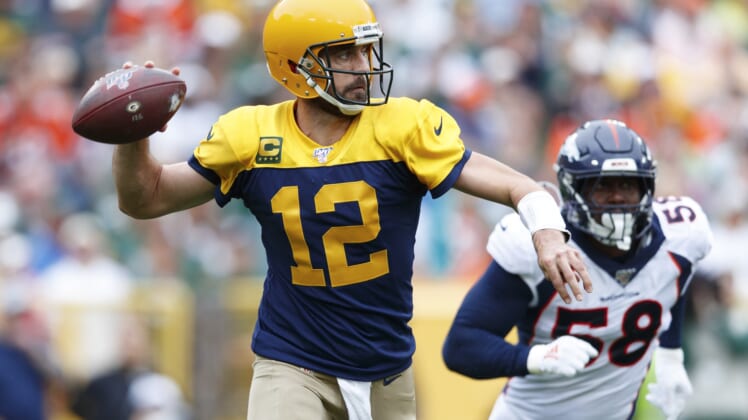 It’s pretty much the best remaining game on the NFL’s Thursday night slate. It also pits a reeling Philadelphia Eagles squad against the undefeated Green Bay Packers at Lambeau Field.

Doug Pederson and Co. are facing as much of a must win as possible at this early stage in the season. Meanwhile, the Packers’ defense continues to dominate under coordinator Mike Pettine.

Losing the recently signed Malik Jackson for the season has hurt this Eagles team in a big way. It heads into Week 4 having recorded all of zero sacks. That’s just not going to get it done. This has also impacted a thin Eagles secondary that has yielded the fourth-most passing yards and a 95.3 quarterback rating on the season.

It’s in this that Aaron Rodgers and the Packers’ offense has a chance to overcome early-season struggles. Riding the coattails of their defense, the Pack rank 28th in total yards and 23rd in scoring offense.

It’s rather obvious at this early point in the season that Rodgers has not meshed with first-year Packers head coach Matt LaFleur and his offense. Green Bay heads into Thursday night ranked in the bottom 10 in scoring offense and No. 27 in passing offense. For his part, Rodgers has thrown for the 23rd-most yards in the NFL.

Whether Week 4 gives Rodgers a bit of a reprieve depends on a bunch of factors. However, he does have a plus-level matchup against an injury-plagued and underperforming Eagles defense.

That’s something we have not been able to say in decades. But as of right now, Green Bay’s defense is among the most-dominant in football. It heads into Thursday night highly ranked in a bunch of categories.

Free-agent acquisitions Preston Smith and Za’Darius Smith have combined for 14 quarterback hits to go with 7.5 sacks. Young cornerback Jaire Alexander already looks like one of the best in the game. It will be interesting to see how this unit performs at home Thursday night.

Since the start of the 2015 season, home teams boast a 34-21 record on “Thursday Night Football.” That’s about par for the course. It’s interesting in that a short week should give the home squad a major advantage.

Though, as has been proven throughout their history, Lambeau Field continues to act as a major advantage. The Packers are a perfect 6-0 in mid-week home games since the NFL started this slate back in 2006. Meanwhile, this is just the Eagles’ fourth road “Thursday Night Football” game.” They are 2-1 in said affairs.