Zach Rice, the top-ranked offensive tackle in the high school Class of 2022, committed to North Carolina on Thursday.

“The difference was obviously I want to play for a Hall of Fame head coach. Mack Brown is amazing,” Rice said during his announcement at an event at Liberty Christian Academy in Virginia. “We’re on the come up right now, I really believe that, and the only thing I can do is get better.”

Rice’s commitment makes North Carolina the only program in the country with commitments from two of the top 10 prospects in the 247Sports Composite rankings. Rice is rated the No. 9 overall prospect, and five-star defensive lineman Travis Shaw is No. 4 overall. 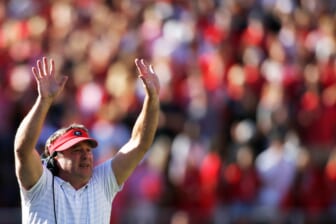 Also Read:
Georgia eclipses Alabama as No. 1 recruiting class for 2022

“I will be a program-changer,” Rice said.