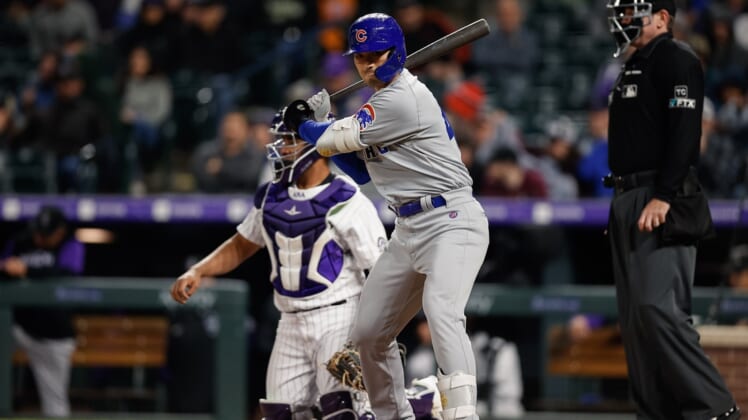 Alan Trejo and C.J. Cron homered, Kris Bryant, Elias Diaz and Ryan McMahon had two hits each, and the Colorado Rockies beat the Chicago Cubs 6-5 in Denver on Friday night.

Ty Blach (1-0) tossed 1 2/3 innings of relief and Daniel Bard earned his third save for the Rockies.

Willson Contreras had three hits, including two doubles, Patrick Wisdom had two doubles and Jonathan Villar also had two hits for the Cubs.

Neither starter made it past the fifth inning on a brisk night in Denver. Colorado starter German Marquez had only one clean inning and left after 4 1/3. He gave up four runs on 10 hits with one walk and three strikeouts.

Chicago’s Marcus Stroman (0-1) cruised into the fourth but was chased after giving up five runs on six hits. He walked one and struck out four

The Cubs took the lead in the second when Villar, Jason Heyward and Alfonso Rivas strung together one-out singles to score the first run.

One out later Rafael Ortega drove in Heyward with a single, but Rivas was thrown out after overrunning second base.

Chicago took a 3-0 lead in the third when Nick Madrigal and Contreras led off with doubles.

The Rockies responded with a big fourth inning. Bryant led off with a single, McMahon doubled to put runners on second and third, and both came home on Sam Hilliard’s double to right.

Garrett Hampson then walked, and Trejo hit Stroman’s 2-2 pitch into the seats in left to give Colorado a 5-3 lead. It was Trejo’s first home run of the season.

The Cubs answered in the fifth inning. Contreras singled with one out, moved to second on Ian Happ’s single to right, and scored on Frank Schwindel’s single to left to make it 5-4.

Blach relieved Marquez and loaded the bases with two outs on an intentional walk to Seiya Suzuki, but he but got Rivas to pop out to end the inning.

Cron’s third home run of the season with two outs in the bottom of the fifth restored the two-run lead.

Chicago scored off Bard in the ninth on back-to-back two-out doubles from Villar and Wisdom.