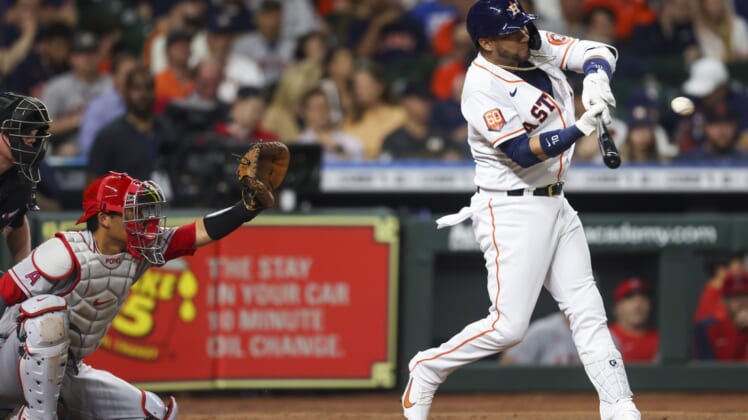 Kurt Suzuki hit a two-run double in a five-run fifth inning that keyed the Los Angeles Angels’ 7-2 road victory over the Houston Astros on Tuesday.

The Angels improved to 4-2 on their seven-game swing through Texas, doing so by riding a balanced offensive attack. Four starters recorded multi-hit games while Suzuki and Brandon Marsh drove in two runners each. Marsh capped the breakout fifth with a run-scoring single.

Mayfield chased Astros starter Framber Valdez in the fifth with a single to left that scored Anthony Rendon and lifted the Angels to a 4-1 lead. Suzuki (1-for-3, two walks, two runs) greeted Houston reliever Bryan Abreu with a double to right field that scored Matt Duffy and Jack Mayfield.

Mayfield was the fourth consecutive batter to reach against Valdez (1-1), all via singles. Duffy delivered an RBI single that plated Taylor Ward, whose one-out single to left got the rally going.

Valdez pitched splendidly against the Angels in the season opener, allowing two hits and one walk while fanning six over 6 2/3 shutout innings. He wasn’t nearly as sharp this time around, surrendering six runs on eight hits and four walks before departing with one out in the fifth.

Valdez has issued nine walks against just six strikeouts over his past two starts and 7 1/3 innings.

The uprising in the fifth gave the Angels a 7-1 lead, a cushion that proved substantial enough for the bullpen to protect. Angels starter Patrick Sandoval allowed just one unearned run on four hits and two walks while striking out five batters over four innings. Oliver Ortega (1-1) followed with two shutout innings to earn the victory, just the second of his career.

Jo Adell finished 3-for-5 with an RBI for the Angels while Ward, Rendon and Mayfield recorded two hits apiece.

Alex Bregman produced a run-scoring single off Sandoval in the third inning, plating Jeremy Pena, who had reached with two outs on a catcher’s interference call against Suzuki. Pena added his second home run in the seventh.