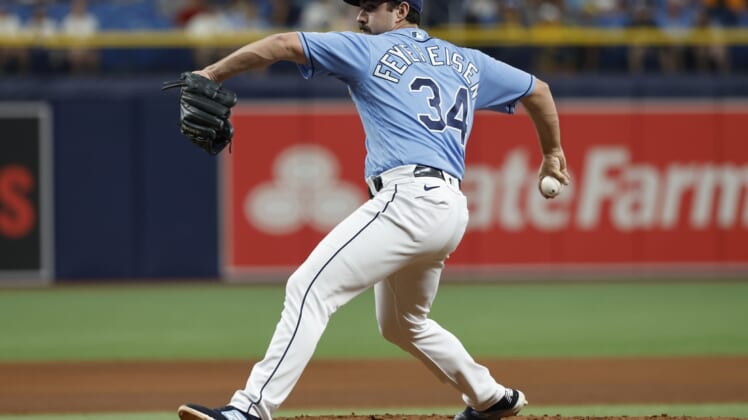 A throwing error by Toronto third baseman Matt Chapman opened the door for a three-run sixth inning by Tampa Bay, and five pitchers combined for a shutout as the Rays defeated the Blue Jays 3-0 on Sunday afternoon at St. Petersburg, Fla.

Wisler picked up the win and Kittredge got the save as the Rays picked up their second win in the finale of a three-game series.

Tampa Bay’s big inning started when Brandon Lowe singled and Wander Franco ended an 0-for-18 slump with an opposite-field single.

Harold Ramirez followed with a chopper to Chapman. But the two-time Platinum Glove and three-time Gold Glove winner tried to force Franco out at second. His throw went wild into right field and Lowe scored the game’s first run.

Franco then scored on a wild pitch by Alek Manoah (4-1) and Ramirez scored the third run on an RBI single by Ji-Man Choi.

That outburst ended what had been a pitcher’s duel and put a rare blemish on Manoah’s history against Tampa Bay. As a rookie last season, Manoah was 3-1 with a 1.46 ERA against the Rays.

Manoah went six innings, allowing one earned run on five hits. He also struck out four in an 82-pitch outing.

Springs, making only his third start since being elevated into the rotation, gave the Rays a strong outing. He struck out two without walking a batter.

Tampa Bay was without its top offensive player. Manuel Margot, who has 14 RBIs in the month of May, was placed on the 10-day injured list prior to the game with a hamstring strain.