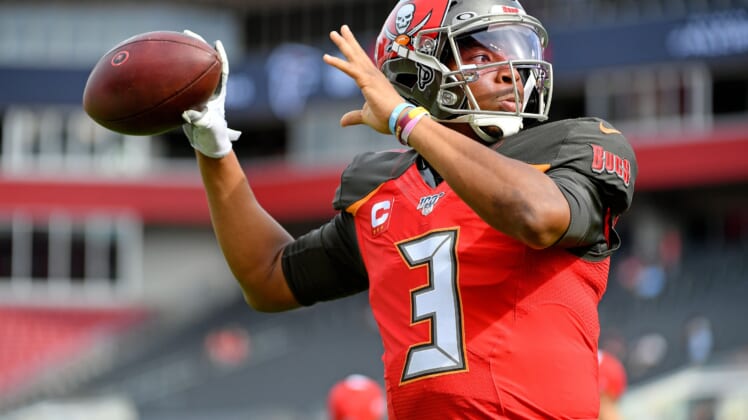 Tom Brady is no longer the quarterback for the New England Patriots. The announcement on Tuesday from Brady that he is leaving the Patriots after 20 seasons sent shockwaves through the NFL. Now, we’re left wondering who will step in as his replacement for the Patriots this season and in the future?

Bill Belichick and the Patriots have made some preparation for this moment, evaluating the market for veteran quarterbacks. They also are high on backup quarterback Jarrett Stidham, a fourth-round pick in the 2019 NFL Draft, who some believe can be the future of the franchise.

No matter who the Patriots name as their starting quarterback next season, they won’t come close to matching the impact Brady had during his career, But, Brady also showed significant signs of decline this past season. The gap in quarterback play, while the sight of a new quarterback under center might be jarring, won’t be nearly as substantial as some expect.

There are plenty of intriguing options still available for the Patriots through a trade, free agency, or the 2020 NFL Draft. Here are five quarterbacks that the Patriots must consider to replace Tom Brady.

We’ve talked about Hurts as one of the biggest sleepers in the 2020 NFL Draft. He won at Alabama and demonstrated his leadership ability, poise and ability to come off the bench and deliver in the clutch. Hurts then went to Oklahoma and managed to learn Lincoln Riley’s system quickly then deliver a Heisman Trophy-caliber season. Since finishing his collegiate career, Hurts has blown away teams at the Senior Bowl and NFL Scouting Combine. Once considered a third-round pick, he might now merit real consideration for a team with a first-round selection.

Hurts likely wouldn’t be ready to start for the Patriots as a rookie. He must improve his consistency as a passer, working on his timing, touch and improving his mechanics. But he’s also made incredible improvements each year and given his work ethic, he’s a player worth betting on. Hurts can be a weapon in McDaniels’ offense as a rookie with his 4.5 speed. As he develops, he could step in and be the future face of the Patriots. The Patriots should consider him with the No. 23 overall selection or move down on draft day to snag him a little later.

If we’re going to believe any coaching staff can fix Winston’s frustrating turnover issues, it would be the Patriots. There’s no escaping his historic tendency for turnovers and he seemingly is drawn towards pick-sixes. The negatives with him are obvious, but few quarterbacks available this offseason offer elite upside and Winston brings that potential.

There’s a reason he was once the No. 1 overall pick. Winston threw for 5,109 passing yards with 33 touchdowns this past season and delivered some incredible stretches. He also underwent LASIK surgery this offseason and that should help correct a documented history of issues with his vision. Winston is an absolute gamble and is the polar opposite of Brady in many ways. If the Patriots really want to move on from Brady and Belichick is willing to take a risk, Winston is the option that offers the highest potential reward.

Before a disastrous 2018 season at Auburn, some thought Stidham could have been a top-10 selection in the 2019 NFL Draft. Instead, he took a step back and his stock tumbled with the Patriots finally snagging him with the No. 133 selection. Stidham was clearly a project that needed a lot of coaching, but he landed in the right spot to get it.

He impressed in the preseason with a 102.6 quarterback rating and 731 passing yards, while completing 67.8% of his attempts. Stidham has also been talked about as a player that Belichick likes. He certainly benefits from already knowing the system and depending on who the Patriots add, Stidham will at least be given a chance to earn the right to replace Brady.

Whereas Winston is the biggest risk, Dalton is the safe option for the Patriots. Belichick’s interest in the three-time Pro Bowl quarterback is known. Cincinnati is shopping Dalton this offseason and while the Patriots would face competition from the Bears, Belichick has a history of deals with the Bengals.

Dalton is better than what we saw this past season. While he completed only 59.5% of his passes with a career-worst 78.3 quarterback rating, he also played behind a terrible offensive line and A.J. Green missed the entire season. Dalton could take advantage of better surroundings and a stronger system in New England. But, realistically, the upside with Dalton isn’t anything more than a slightly above-average quarterback. The Patriots can do better to replace Tom Brady, though, they could also do worse.

The Panthers are clearly ready to move on from Cam Newton. At a time when the Patriots need to find a viable replacement for Brady to stay competitive next season, making a move for Newton could be the ideal situation. The 30-year-old quarterback will be looking to prove himself after getting pushed out the door and missing 14 games this past season. Meanwhile, Newton offers immense upside if he’s healthy and New England wouldn’t need to make a long-term commitment to him.

Given the Panthers already signed Teddy Bridgewater, their leverage in negotiations likely took a hit. Ideally, Carolina might be now hopeful that it could land a third-round pick for its former star quarterback. The Patriots have three third-round selections this year and could potentially package the No. 98 overall selection and a conditional 2021 fifth-round pick. If Newton proves to be healthy, he can be a top-10 quarterback in Josh McDaniels’ system and the Patriots would have a great shot at competing for the AFC East crown.