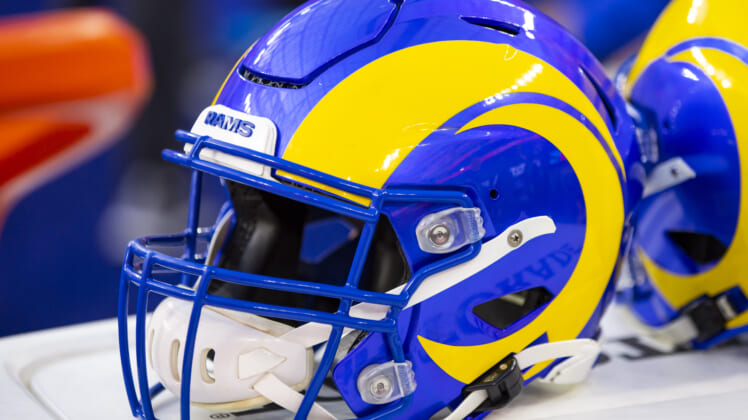 The Los Angeles Rams may be entering a sticky situation as their preseason gets underway. Starting quarterback Matthew Stafford is dealing with a unique elbow issue, one that baseball players typically deal with, and it’s costing him practice time.

He hasn’t been throwing much in camp as he deals with what’s been described as ‘bad elbow tendinitis‘ by some NFL sources. Stafford’s on a pitch count while the team tries to manage the situation, but what if things get worse?

What if the reigning Super Bowl champs face a situation where Stafford can’t start the year, and possibly has to miss an extended stretch as they look to defend their trophy? How will navigating the NFC West go without a capable starting quarterback? I think it’s a recipe for disaster.

Preparing for the worst, but not hoping for such a scenario, here are five potential QB solutions for the Rams should you know what hit the fan.

Drafted to be the potential future of the Green Bay Packers, Jordan Love has to be itching for an opportunity. Right now, the Packers don’t offer one, with Aaron Rodgers entrenched as long as he wants, but his contract runs through 2026. We don’t expect the now 39-year-old to play until he’s 43, but the chance he walks away after his season appears slim.

Of course, a lot could change a year from now. But next season will be Love’s last year under contract with the Pack, and there’s no reason for him to return if Rodgers has yet to retire.

Still 23, Love has appeared in just six games, making one start in his two-year career to this point. Unless Rodgers gets hurt, Love’s set to ride pine all season long. Although the Packers don’t really have another strong backup option, it could be Love who requests a trade this preseason if he has a strong performance.

And if the Rams’ need for a fill-in starter becomes vital, trading for Love might be one of the best fallbacks available. We don’t know the diagnosis of Stafford’s arm. We’re all hoping for a short and full recovery, but until we know more, the Rams should start considering contingency plans. Love would be a fine solution.

Teddy Bridgewater is the definition of a journeyman quarterback at this stage in his career. But that’s a million times better than nearly losing his leg after his devastating ACL tear which included additional ligament damage in 2016 with the Minnesota Vikings.

Perhaps impacted by his career-altering injuries, Bridgewater never quite lived up to his first-round potential, but the quarterback he is today is still respectable. Teddy B is the type of QB who may not help you go win a ton of games by himself, but he’s also not going to risk the game, by making multiple dumb mistakes.

Bridgewater is more of a game manager who can help the Rams stay in the game, and maybe their elite cast of pass-catchers can help carry them to victory. Signing in his hometown of Miami to backup Tua Tagovailoa, prying him away from the Dolphins may not be easy, but if it’s a surefire chance to play, Teddy Two Gloves may be the first one in the pool.

Related: Cooper Kupp lists his top-five wide receivers, but not himself

It’s been five years since former Super Bowl-winning QB Joe Flacco was a full-time starter, and he was never among the best in the league. But those who have worked closest with him recently suggest Flacco still has what it takes to start in the NFL.

He actually did get to start a game with the New York Jets last season, going 24-of-39 with 291 passing yards and two touchdowns, falling 24-17 to the Miami Dolphins. But it wasn’t a bad effort for a guy who joined the team just three weeks prior. His ability to quickly pick up the system has to be seen as a plus, making him a viable candidate in L.A.

Related: Zach Wilson achieves 69 mph on the radar gun, fastest for any QB measured by Next Gen Stats

Mitch Trubisky works out in LA

This would be a shock. But with the Pittsburgh Steelers already having their long-term starter waiting in the wings with first-round pick Kenny Pickett, if the two are even close in their competition, why not trade Mitch Trubisky?

They’ll still have Mason Rudolph, who somehow remains on the roster after four seasons with the team, giving Pickett a veteran backup who can continue to provide pointers while also being able to step in for a pinch.

Trubisky’s on a two-year contract, and while the Rams may only need him for one, he’d be a nice addition. Their passing offense would take a big step back from Stafford, but we may have yet to see the best from the former second overall pick. Plus, his added mobility might give Sean McVay a few bright ideas, as he’s not used to having anything other than a statue in the pocket.

Gardner Minshew gets another chance

One short-term addition the Rams could make in 2022 is trading for Gardner Minshew from the Philadelphia Eagles. He’s 26, has made 22 starts between the Eagles and Jacksonville Jaguars and even managed to lead the latter to a 6-6 record as a rookie in 2019.

Things tailed off from there, with Minshew going 1-7 in his second year in Jacksonville before giving way to Trevor Lawrence last season. Minshew is a fiery competitor who plays with a chip on his shoulder and joining a roster like the Rams would be by far the best group he’s ever been a part of.

Minshew is in the final year of his rookie contract in Philly, and they’ve been enamored with undrafted rookie Carson Strong. If Strong has a solid showing in the preseason, it’s possible the Eagles would consider a trade before Minshew walks in free agency next offseason. Maybe L.A. is the next place where Minshew Mania takes over the fanbase, they could do a lot worse if Stafford’s in trouble.