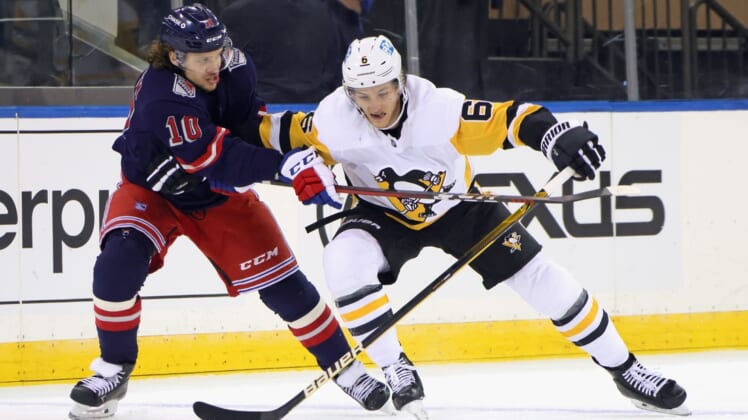 Rookie Radim Zohorna was one of four players who had a goal and an assist Thursday for the visiting Pittsburgh Penguins in a 5-2 win over the New York Rangers.

Kris Letang, Evan Rodrigues and Jason Zucker also had a goal and an assist, and Mark Jankowski scored for Pittsburgh, which earned a split of the teams’ two straight games.

Penguins goaltender Tristan Jarry, who got pulled after one period Tuesday, made 22 saves.

Colin Blackwell and Kevin Rooney scored for the Rangers. Igor Shesterkin made 27 saves.

Zohorna, playing in his fourth NHL game, got his second goal and fourth point at 6:26 of the first to give Pittsburgh a 1-0 lead. He moved in from the right point, shielding the puck from defenseman Libor Hajek along the way. He went backhand to forehand and put the puck past Shesterkin’s right skate.

On a New York power play, Blackwell tied it at 2:02 of the second. Pavel Buchnevich, from the goal line to Jarry’s left, fed the puck to Blackwell in the slot for a one-timer past Jarry’s blocker.

The Penguins regained the lead 1:21 later. Letang’s shot from the right circle was immediately clipped by the stick of Chris Kreider and then found its way through traffic to make it 2-1.

Rodrigues, on a Pittsburgh power play, went to the net and converted a short feed from Zohorna to extend it to 3-1 at 11:28 of the second.

At 16:14 of the second, Penguins winger Sam Lafferty and Rangers defenseman Brendan Smith engaged in a rarity these days in the NHL, a fight.

Pittsburgh defenseman Cody Ceci tripped Kreider from behind while Kreider was on a breakaway, and Kreider was awarded a penalty shot at 17:59 of the second. Jarry got his glove on the shot.

Zucker pushed it to 4-1 with a backhander that went under Shesterkin’s pads at 10:29 of the third. Ceci picked up his 100th career assist.

Jankowski added an empty-netter with 1:31 left.