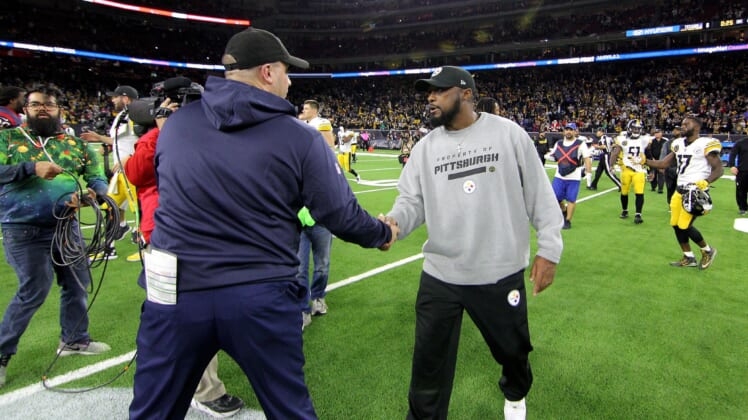 The focus around this time of the year is normally on head coaches who find themselves squarely on the hot seat.

While that might be the case with a few of these coaches listed above, there’s a number of veteran head men who are in must-win mode heading into the 2020 NFL season.

Could the Pittsburgh Steelers make a rare coaching change should Mike Tomlin fail to lead them to the playoffs once again? Is the 2020 campaign the biggest to date for San Francisco 49ers head coach Kyle Shanahan?

These are among the five head coaches heading into the 2020 NFL season under the most pressure to win.

As the second-longest tenured head coach in the NFL, Tomlin’s job might seem safe. After all, Pittsburgh has had a total of three head coaches since the end of the 1968 season. It’s among the most remarkable stats in the sports world.

Unfortunately for Tomlin, his Steelers have not seen much recent success. They’ve missed out on the playoffs each of the past two seasons. Future Hall of Fame quarterback Ben Roethlisberger returns after suffering an elbow injury last season. The expectations are high. Another season in which Pittsburgh ultimately misses out on the playoffs could lead to Tomlin’s demise after 14 seasons.

There’s good news on this front for Zimmer. He appears to be tied to the hip with general manager Rick Spielman. There’s also some bad news on that front. Another season in which Minnesota fails to go deep into the playoffs could lead to both of these long-tenured veterans being ousted from the Twin Cities.

Minnesota put up a decent 10-6 record last season before laying a complete egg against the San Francisco 49ers in the NFC Divisional Playoffs. Despite being respected around the league, Zimmer has earned a playoff spot in half of his six seasons with the Vikings. They are in win-now mode after a tremendous 2020 NFL Draft. The pressure is clearly on Zimmer here.

Power vacuum. O’Brien filled that in more ways than one earlier this offseason when he was officially named the Texans’ general manager. Already embattled as a head coach following last season’s disastrous playoff performance, O’Brien’s first decision in the GM role was to trade DeAndre Hopkins for pennies on the dollar. He was ridiculed to no end for that move.

Now that O’Brien has control over the personnel, all of the onus in Houston is on him. Not only does his odd personnel moves need to pan out, the head coach must actually win come January. He’s now just 2-4 in the playoffs. That must change in short order if O’Brien is going to withstand the scrutiny we’ve seen directed at him.

Shanahan took over pretty much an expansion roster with the 49ers back in 2017. Coupled with the hire of general manager John Lynch, the two have turned said roster into a legit Super Bowl contender. It has certainly been the modern definition of team building, a process other organizations are attempting to duplicate.

Signed to a six-year contract, Shanahan is now entering the latter half of said deal. His 49ers are legitimate title contenders after holding a 10-point lead in the fourth quarter of February’s Super Bowl. While Shanahan will be in San Francisco over the long haul, he is definitely in win-now mode. It’s all about capturing that elusive sixth Super Bowl title in the Bay. This coming season will prove whether Shanahan is capable of that after he’s bombed out in his first two Super Bowls in important roles.

Tampa pulled off a pretty big coup ahead of last season, bringing Arians out of retirement in an attempt to fix former No. 1 pick Jameis Winston. It did not happen. Winston threw a resounding 30 interceptions as the Buccaneers finished with just seven wins.

Everything has changed since. Tampa pulled off another coup back in March, signing six-time Super Bowl champion Tom Brady. It then paired him up with Rob Gronkowski. Needless to say, the Buccaneers are in win-now mode. Arians might have only one more season to prove that he can bring another title to west central Florida.