The NBA season kicked off on Tuesday with former teammates Kobe Bryant and Dwight Howard getting into it. If that’s the drama we can expect for the remainder of the year, it’s going to be a great season around the Association.

But unlike other professional sports, there doesn’t seem to be as many surprises around the NBA. Heading into each team’s season openers, which continue on Wednesday, we already have somewhat of an idea who the 16 playoff teams will be when spring comes calling

Let’s check in on five NBA teams set to surprise this season. 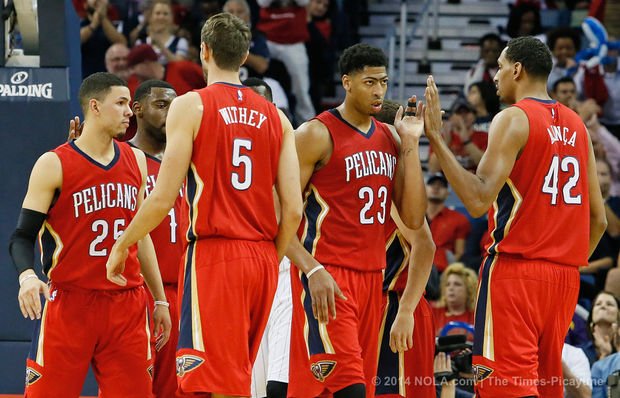 Anthony Davis and the Pelicans should surprise

The Pelicans are coming off a 34-win season in 2013-14, which was a seven-game improvement from the previous year. The reason? Anthony Davis. By the end of the season, Davis will be on everyone’s radar as one of the best all-around players in the league. In his season debut Tuesday night, Davis stat sheet read likt this: 26 points, 17 rebounds, nine blocks (yes, nine) and three steals. Add the talents of point guard Dru Holiday, shooting guards Eric Gordon and Tyreke Evans, plus big men Omer Asik and Ryan Anderson…and you’ve got yourself a pretty decent roster. If they stay healthy, the Pelicans should be fighting for a playoff spot in an extremely difficult Western Conference. If they were in the East, they’d be a likely top-five team. 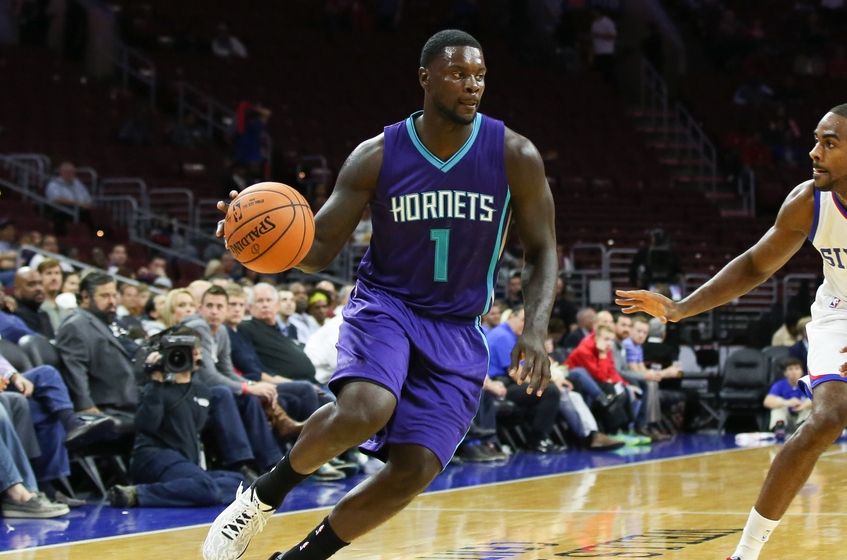 The Hornets hope Stevenson is the missing link to becoming a legit playoff team – (courtesy: swarmandsting.com)

The Hornets are back. Any 28 to 38-year-old basketball fan remembers the old Hornets, and to see their teal and purple colors back in the NBA makes everyone happy. A team that won 43 games last year essentially brings back the same roster plus Lance Stephenson. Owner Michael Jordan recently indicated in an interview with ESPN that the Hornets signed Stephenson to shut down LeBron James. In what could be the weakest Eastern Conference in the history of the NBA, the Hornets are in really good shape to make another playoff appearance. They gave Kemba Walker a four-year extension on Tuesday and are looking to younger players like Michael Kidd-Gilchrist and Cody Zeller to grow their game and put in valuable minutes in order to help the veterans. This is now a team that players want to suit up for, which something the former Bobcat teams weren’t able to claim. 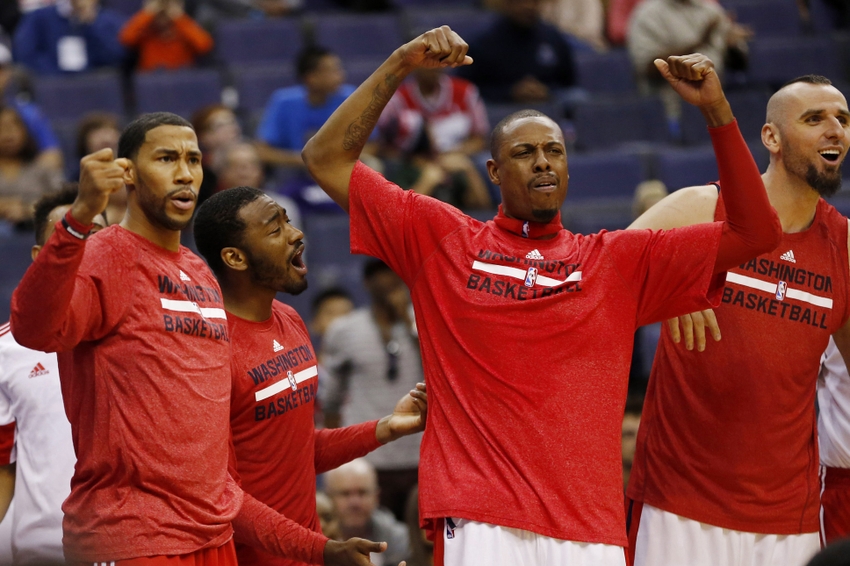 Paul Piece gives the Wizards more experience, something they need if they want to improve. (courtesy – wizofawes.com)

Most NBA fans are aware of the Wizards after their successful season last year. What the casual NBA fan may not realize, is how good this team could be moving forward. Coming off a 44-win campaign, the Wizards bring back the same core of players that gelled extremely well as the season went on last year. Although Bradley Beal could miss up to two months with a broken wrist, this squad is built to succeed without him. Key veteran additions include Paul Pierce and Kris Humphries as well as Andre Miller, who the team trade for last year. If the Wizards keep pace for the first two months, getting Beal back healthy will help John Wall and Co. become a real threat to contend for East crown. 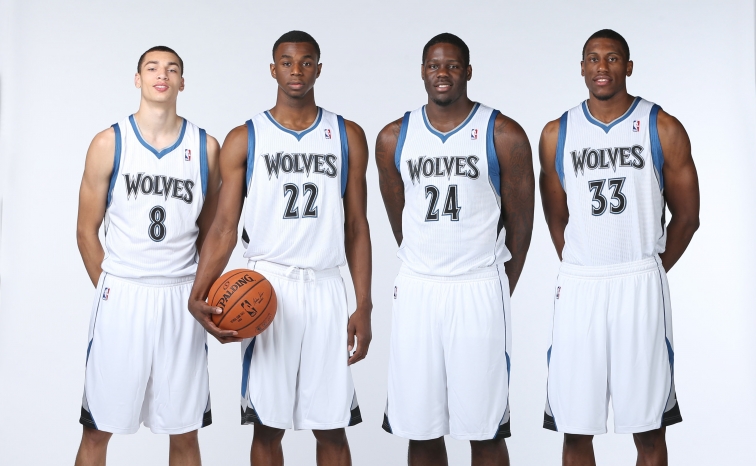 The Wolves have a young core they hope is the foundation of their franchise for years to come. (courtesy – northpolehoops.com)

Unlike the aforementioned Hornets and Wizards, the step forward for the Timberwolves won’t be making the playoffs. If they do, that’d be a massive step forward for a team that hasn’t played more than 82 games in a season since Kevin Garnett was on the roster. The intriguing part for the Timberwolves is how different the roster looks compared to last year.Kevin Love is now gone, and according to current players like Ricky Rubio, that seems to be completely fine with them.

No question, the Wolves have a ton of youth with lots of potential. This year’s first overall pick Andrew Wiggins and fellow rookies Zach LaVine and Glen Robinson III will grow along side second-year players Anthony Bennett, Shabazz Muhammad and Gorgui Dieng. Right there, the Wolves have six young players who all have enough talent to be solid players in this league. Bennett and Muhammad arrived at training camp looking like NBA 2K15 “create-a-player” versions of themselves, thanks in part to intense off-season training in California.

There is no question Rubio and the other veterans will be working their tails off so they don’t lose minutes to this core of youngsters. Remember too, that an unhappy Wolves team won 40 games last year, albeit with Love on the roster. Even so, if this team comes together and plays fun, team basketball…30 to 35 wins isn’t out of the question. That would create a ton of much-needed buzz in the Twin Cities. 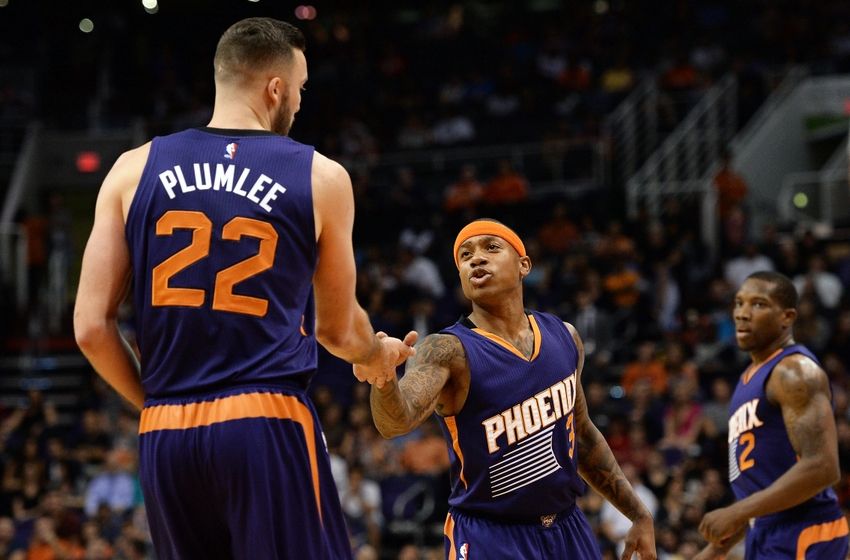 The Suns were last year’s first half surprise, but fell apart down the stretch as the difficulty of the Western Conference got the better of them. In somewhat of a surprising move, the Suns completed a sign-and-trade with the Sacramento Kings for point guard Isaiah Thomas. The Suns are going with a four guard rotation of Thomas, Eric Bledsoe, Goran Dragic and Tyler Ennis in the hopes that it takes some pressure of the frontcourt. The biggest question mark is whether the Suns can protect the rim, and there’s been rumors of a potential trade for Indiana Pacers’ center Roy Hibbert. It wouldn’t be shocking to see the Suns trade one of their guards (Dragic for example), to add some rim protection with the likes of Dwight Howard, Tyson Chandler, Tim Duncan, Anthony Davis, Blake Griffin…well, you get the idea. The Suns should be a fun team to watch this year and should be in the hunt for the duration.