Five most overpaid players in the NFL 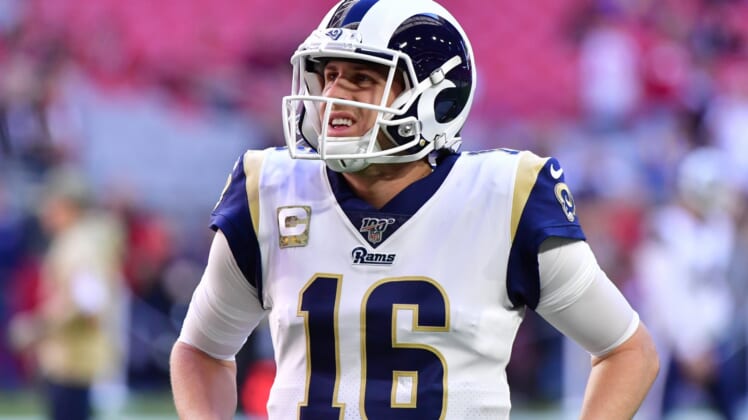 As the NFL continues to hit record-setting revenue marks each year, the league’s salary cap has skyrocketed with player salaries following suit. Teams are spending more than ever and while a lot of moves have worked out, plenty of contracts have led to some players being massively overpaid.

Quarterbacks are more imporant than ever and the challenge of finding a great quarterback has led plenty of teams to overpay their guys. Of course, that isn’t the only position that is getting overpaid these days with teams awarding jaw-dropping deals to running backs.

The NFL is facing an unprecedented financial hit due to the COVID-19 pandemic, which could deliver a crushing blow to the 2021 salary cap. It will prove to be especially unfortunate for these teams that are stuck with the five most overpaid players in the NFL.

The Los Angeles Rams have made quite a few mistakes in recent years with contract extensions. They moved on from Todd Gurley and Brandin Cooks this offseason, but the one that hurts the most remains. Even after restructuring his contract, general manager Les Snead is kicking himself for making Jared Goff one of the NFL’s highest-paid players.

Los Angeles went way over the top with this deal. Goff enters the season with the third-highest average annual salary ($33.5) million, making more than Carson Wentz, Matt Stafford, Drew Brees and Tom Brady. Keep in mind, Goff’s success in 2018 was the product of Sean McVay’s system and a strong offensive line. Now that the Rams don’t have the cap room or draft picks to rebuild their offensive line, Goff will keep getting exposed as an average talent. Sadly for the Rams, the earliest they can get out of this deal is after the 2022 season.

Let this be a lesson for NFL teams not to overpay running backs, especially in free agency. New York thought it would make a splash during the 2019 offseason, so it gave Bell the massive contract he sat out an entire season for. It turns out, as demonstrated by Pittsburgh’s success without him, Bell isn’t worth the massive price tag.

Regret instantly sunk into New York after Bell signed his $52.5 million deal with $27 million guaranteed. Playing behind an awful offensive line, the 28-year-old averaged just 3.2 yards per carry and showed little playmaking ability. He will be owed nearly $13.5 million this year and is about to lose some carries to Frank Gore. Just to get rid of him next offseason, the Jets will need to pay him even more money. Just think of the other ways the team could have used this cap space.

It felt like disaster was looming the moment the Giants signed Solder to a four-year, $62 million contract. The New England Patriots attempted to bring him back, but realized he wasn’t worth being paid like an elite left tackle. As it turns out, in less than a year, New York learned that lesson the hard way.

Solder might have the prototypical size at 6-foot-8, but it hasn’t translated to any kind of success with the Giants. He allowed 11 sacks this past season, per Pro Football Focus, while playing a huge role in rookie Daniel Jones constantly being pressured. The Giants realized Solder wasn’t the answer and brought in Andrew Thomas as the potential long-tern solution. New York will be stuck with his contract for the next two seasons, flushing $27 million down the drain.

It’s one thing to sign a running back to a massive contract, but trading for one is a new level of absurdity. The Arizona Cardinals knew they needed to dump David Johnson this offseason and they seemed willing to do whatever it took to get rid of his contract. It turns out, Bill O’Brien seems to value overpaid players.

Johnson will head into the season as the NFL’s fourth-highest paid running back ($13 million) in average annual salary. Keep in mind, he has 2,191 scrimmage yards in his last 30 games. He’ll make some big plays with the ball in his hands and he’s a great receiving back, but he’s not worth his contract. All of that alone makes him overpaid, but O’Brien made things worse by trading DeAndre Hopkins for Johnson.

The Minnesota Vikings sure like to give Kirk Cousins guaranteed money. While other teams on this least at least protect themselves with partial guarantees and bonuses to keep things from getting worse, the Vikings put all their chips on the table. Seemingly pleased with the results Cousins gave them across two seasons, Minnesota awarded another $66 million guaranteed.

Keep in mind, Minnesota gave him the massive extension this offseason due in part to cap limitations they faced. Meanwhile, they traded away star receiver Stefon Diggs and are now forced to rebuild their defense. When the NFL salary cap shrinks next offseason, the Vikings will be stuck with Cousins’ contract. As a result, they’ll keep paying a top-14 quarterback like he is an MVP candidate.