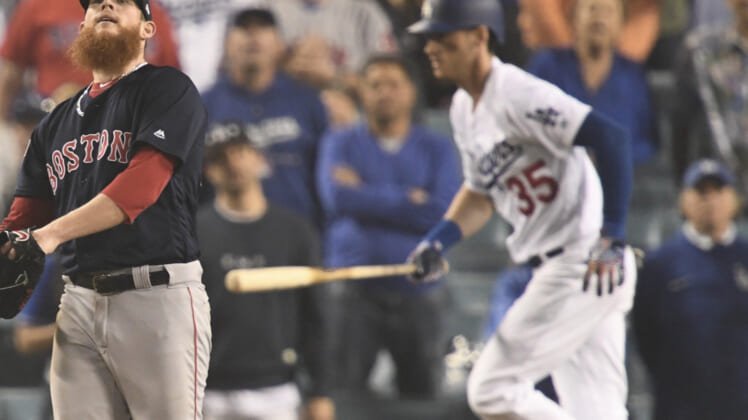 While he’s been arguably MLB’s best closer for a solid decade, Craig Kimbrel remains unsigned. A number of teams should be looking to change that.

In his career, Kimbrel has pitched for three teams. One of them needs to give a reunion some strong consideration. Over the last three World Series, the National League has been represented by either the Chicago Cubs or Los Angeles Dodgers. If they want to get back, adding Kimbrel would be a huge step in the right direction. The same can be said about the Seattle Mariners, who currently have the longest postseason drought in North American sports.

These five teams owe it to themselves and their fans to, at the very least, give Kimbrel a hard look.

This move made sense even before Arodys Vizcaino’s season-ending injury. The bullpen was shaky even with one of its most stable arms healthy and available. But with him on the shelf, Atlanta making a big play for Kimbrel is now a must.

While the Cubs has largely gotten on track after a slow start, the early part of the season has still been uneven. The bullpen has been a big reason for that. Chicago relievers have posted a 5.43 ERA and a 1.686 WHIP, while opponents are hitting .257/.372/.435 off of them. On the season, the Cubs have recorded only one save and have blown three. It’s early, of course. But that’s problematic, especially in an era where other teams are shrinking games.

In 2016, the Cubs looked like they were set up to be a dynasty. But dealing guys like Gleyber Torres, Eloy Jimenez, and Dylan Cease has done a lot to hurt Chicago’s long-term window. That places a lot of extra importance on the short-term. Signing Kimbrel would do a lot to improve the short-term outlook.

By all accounts, the Mariners looked to be rebuilding heading into the season. Seattle is 13-7 through its first 20 games and is right in the middle of the playoff race. But of course, there’s a lot of baseball left to be played. So, the question for the Mariners now is how do they stay in the race?

Well, one of the reasons for the assumed rebuild was that Seattle traded star closer Edwin Diaz. While the team has started 2019 well, it’s also felt his loss. Mariners relievers have a 4.71 ERA and a 1.390 WHIP, and have already blown four saves. Bringing in Kimbrel would do a lot to offset the loss of Diaz. It would also give the Seattle a much better chance of remaining a part the American League playoff picture through the season.

Los Angeles relievers have struggled in the early part of 2019. Collectively, they have a 4.83 ERA and 1.280 WHIP and opponents are hitting .254/.314/.421 against the Dodgers bullpen. Kimbrel would do a lot to help that. Obviously, this would be an outside of the box move. Moving either Kimbrel or Kenley Jansen into a setup role would be unusual.

But one, Jansen has expressed a willingness to add top-tier closers in the past. Two, while Los Angeles has won six straight NL West titles, the franchise is still looking for it’s first World Series since 1988. The bullpen has consistently fallen short in the postseason. The 1-2 punch of Kimbrel and Jansen would do a lot to shrink games and give the Dodgers a chance to hold those October leads.

We’d say that the Washington bullpen has been a dumpster fire this season. But that would only insult the good name of dumpster fires. The Nationals bullpen has locked down only one save and has blown four of them. Collectively, Washington relievers have posted a 7.83 ERA and 1.809 WHIP, while opponents sport a .308 batting average and a .400 OBP. Every one of those totals is the worst in the league.

Signing Kimbrel alone would not fix all of the woes. As the season gets going, the Nats can look to add bullpen pieces in trades. But if Washington needs to be a buyer, then some more immediate bullpen stability is needed. Adding Kimbrel would provide that.