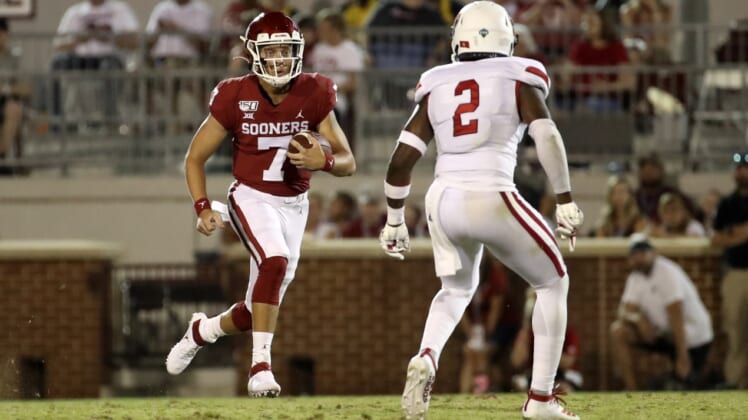 Just take a quick look at the prospects set to enter the NFL draft and it’s clear there are plenty of opportunities for young college football players to star in 2020.

We’re honing in on five young players who are set to dominate the college football landscape in 2020. These guys will absolutely feast next season as they become household names.

We know that Clemson loves to pound the rock and play defense, and with Travis Etienne coming back for his senior campaign that trend will continue in 2020. But what makes these Tigers so dangerous is that they also have one of the best quarterbacks in the nation in Trevor Lawrence, and he should only get better in his third year as the starter.

With that in mind, we’re excited about a receiver who showed out a bit as a true freshman with 17 catches for 240 yards and three scores. With Tee Higgins moving on to the NFL, Joe Ngata should become a primary weapon for Lawrence. A 6-foot-3, 215 athletic marvel, he should take flight with a monster sophomore campaign.

One could argue that Kayvon Thibodeaux has already made his mark. As a true freshman for the Ducks in 2019, this electric former five-star recruit out of Thousand Oaks, Ca. racked up nine sacks and an absurd 14 tackles behind the line of scrimmage. But given the fact that this young man is still just 19 years of age and has two years left at school, it feels like he has yet to truly show the world what he can do.

That should change in 2020. He’ll be atop the depth chart as an undisputed veteran leader for Oregon in his sophomore season, and given the talent the program has on the back end of the defense Thibodeaux should have ample opportunities to bring down opposing quarterbacks. We expect him to put up double-digit sacks and potentially lead the nation when it’s all said and done.

To nobody’s surprise, Wisconsin lost star running back Jonathan Taylor to the NFL this winter. It also should not surprise anyone to learn that the Badgers already have a built-in succession plan with Nakia Watson set to take over as the presumed workhorse in 2020.

As a true freshman in 2019, Watson showed off the type of physical running style normally associated with Wisconsin running backs. He got extended work in games against South Florida, Michigan and Kent State, finishing his first season with 334 yards and two touchdowns from scrimmage. Given the way the Badgers love to ground and pound, he’ll be heavily featured next season and should be among the nation’s leading rushers.

Chase Young was the undisputed best defender in college football last season. The Buckeyes just so happen to have another young stud lined up to take his place as he prepares to be a top pick in the 2020 NFL Draft. Already with some experience under his belt, Zach Harrison was Young’s replacement during his two-game suspension and finished the season with 3.5 sacks, five tackles for a loss and 24 tackles overall.

For those who love to make comparisons, those numbers are eerily similar to what Chase Young did in 2018 before leading the nation with 16.5 sacks despite missing two games. Harrison has a chance to follow Young straight to the top of the 2021 NFL Draft if he breaks out next season the way most expect.

There’s plenty of talk that the Sooners are going to have a heated quarterback competition this summer with Jalen Hurts moving on to the NFL. Spencer Rattler will have to beat out Tanner Mordecai, and you know head coach Lincoln Riley will be talking up this battle all summer long (like he did last year despite Hurts being the obvious choice).

Like Hurts, Rattler is the guy most believe will win the competition. Heck, he’s being given the third-best Heisman odds in 2020.

Assuming he does live up to the hype this offseason and takes over for Hurts under center for the Hoosiers, then we expect Rattler — the highest-ranked quarterback from the 2019 recruiting class — to have a breakout season in 2020.