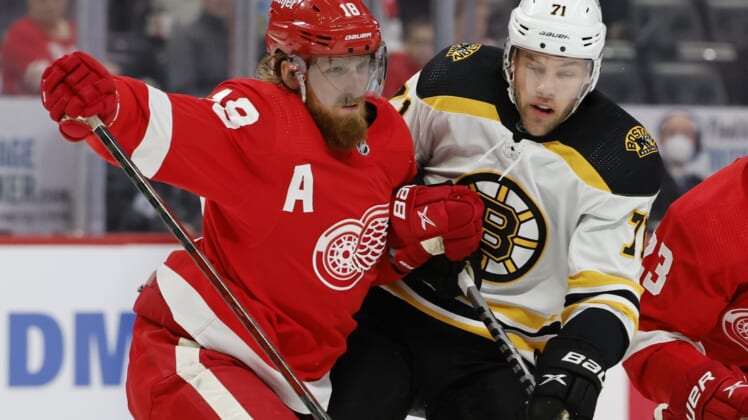 Jeremy Swayman made 23 saves in goal and five different players scored to lift the Boston Bruins to a 5-1 road win over the Detroit Red Wings on Sunday.

Tomas Nosek had a goal and an assist and Patrice Bergeron, Erik Haula, Charlie McAvoy and Trent Frederic each added goals for Boston, which won its second straight game.

Tyler Bertuzzi scored the lone goal of the game for Detroit, which lost its second straight overall and third consecutive at home.

The Red Wings opened the scoring with 8:32 left in the first period on a goal by Bertuzzi, who camped himself to the side of the Boston goal and tapped in a loose puck off of a shot from the point by Danny DeKeyser to make it 1-0 Detroit.

Boston answered later in the first, tying the game at 1-1 with 5:13 left in the period on a goal by Bergeron.

Craig Smith fed a pass from behind the Detroit goal to Bergeron, who buried a chance from the slot.

The Bruins then took a 2-1 lead with 12:23 left in the second period on an unassisted goal by Haula, who skated down the left side and fired a shot from the face-off circle that went above the shoulder of Detroit goalie Alex Nedeljkovic and into the net.

In the third period, Boston took control with a pair of goals in a span of 1:56.

First, McAvoy gave the Bruins a 3-1 lead with 14:01 remaining in the game when he took a cross-ice pass from Taylor Hall and buried a wrist shot into a half-open net.

Then with 12:05 left, Frederic made it 4-1 when he banged home a rebound off of a shot by Mike Reilly.

Boston then went up 5-1 with 9:20 remaining on a goal by Nosek, who fired a shot from the right face-off circle went through Nedeljkovic and in the net.