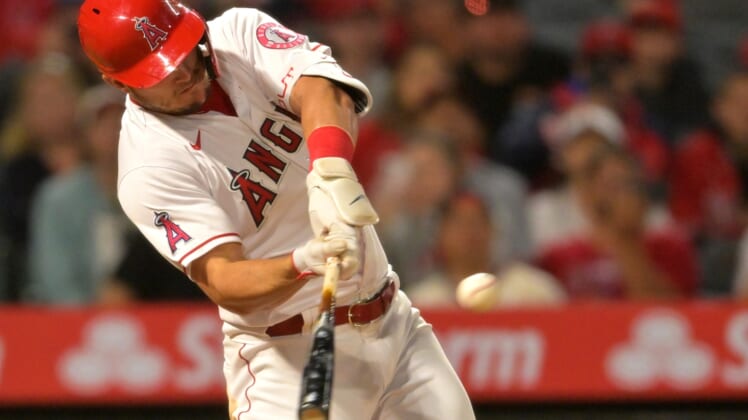 Jhonathan Diaz and four relievers combined on a four-hit shutout in the Los Angeles Angels’ 3-0 victory over the Washington Nationals Friday night in Anaheim, Calif.

Diaz (1-0), just called up from Triple-A Salt Lake to replace Jose Suarez in the rotation, went five innings and allowed three hits and four walks while striking out four and making 67 pitches.

The Angels had only five hits themselves, including two by Mike Trout, who had the big hit of the night. Trout’s bases-loaded double in the fifth inning off Nationals starter Joan Adon drove in two runs.

The Angels took a 1-0 lead in the first inning against Adon but missed an opportunity for a bigger inning.

Taylor Ward led off with a walk and went to second on a single by Trout. They moved up to second and third on a wild pitch, Ward then scoring from third when Shohei Ohtani grounded out to second.

However, Trout stayed at second on the play, and was stranded there when Adon (1-5) struck out both Anthony Rendon and Jared Walsh to end the inning.

The Angels added to their lead in the fifth after they loaded the bases with one out. Trout fell behind in the count, but ripped an 0-2 fastball to the wall in right-center for a two-run double.

After Ohtani was intentionally walked to re-load the bases, Rendon grounded into an inning-ending double play.

The Nationals had opportunities to score, but Diaz worked his way out of a couple jams. In the first inning, Washington put runners on first and second with one out, but Diaz got Nelson Cruz to hit into an inning-ending double play.

In the third, Alcides Escobar tripled with one out, but Diaz struck out Cesar Hernandez for the second out of the inning. After a walk to Juan Soto, Diaz got Josh Bell on a flyout to end the inning.