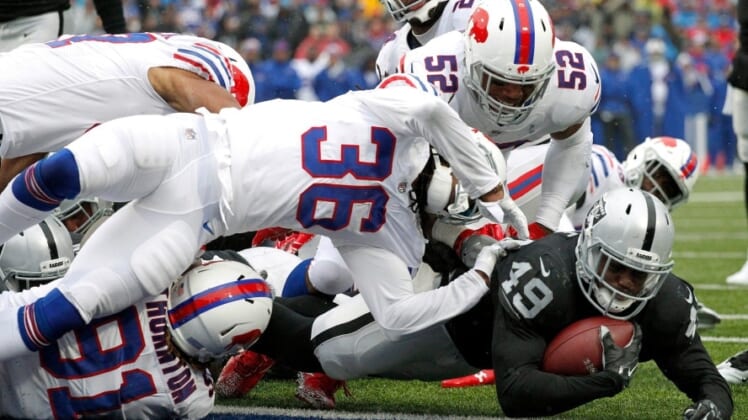 Oakland Raiders fullback Jamize Olawale (49) dives in for a touchdown as Buffalo Bills defensive back Trae Elston (36) and middle linebacker Preston Brown (52) try to stop him during the first half of an NFL football game, Sunday, Oct. 29, 2017, in Orchard Park, N.J. (AP Photo/Jeffrey T. Barnes)

The playoffs are now a longshot for Oakland after dropping their fifth of their last six games in an ugly, turnover-laden loss on the road in cold and rainy Buffalo.

The Raiders again struggled executing on offense, and turned over the ball four times, to drop to 3-5 in a lopsided 34-14 loss to the Bills on the road in Buffalo.

Oakland again joins the Los Angeles Chargers in the basement of the AFC West.

After starting the game with a nice offensive drive that was capped with a one yard Jamize Olawale touchdown run, the Raiders contracted a case of the fumbles which resulted in 14 unanswered Bills points.

In the second quarter, after a nice reception on a first and 10 play, Raiders running back DeAndre Washington was hit and the ball popped loose into the waiting arms of Bills linebacker Matt Milano who scampered 40 yards to give Buffalo a 14-7 lead.

Then, after the Raiders defense made a statement holding the Bills on the first second half possession, Jelan Richard fumbled the ball deep in their own territory after another great Raiders defensive stop. After Buffalo punted, they recovered the dropped Richard ball in the redzone eventually converting it into three points on a Steven Hauschka 35-yard field goal to give Buffalo a 17-7 lead with 11:44 left in the third.

Turnovers were the storyline of this game and it was hard to get past them for a Raiders squad that’s still having trouble midway through the 2017 season finding its identity, its focus and any semblance of consistency. After an epic win at home against Kansas City last week, the Raiders seem to subscribe to the “one step forward, two steps back” philosophy.

What continues to haunt the Raiders is a lack of execution on offense. Despite some in Raider Nation blaming the offensive play calling, observers will note Oakland’s biggest enemy on offense: a lack of consistent execution in the small details. Dropped passes, not following blocks up front, and even poor route running at times have all contributed to the Raiders anemic offense – despite having some of the best talent in the NFL.

Quarterback Derek Carr – despite a flawless first drive – struggled to stay on the field and was let down often by his supporting cast. Carr finished the day 31-of-49 for 313 yards, one touchdown and two interceptions.

Going in, the Raiders knew it would be tough to run on the strong Buffalo defensive front. Playing without Marshawn Lynch, who was serving a one-game suspension for leaving the sidelines during a skirmish against the Chiefs, the Raiders mustered just under 60 yards between Richard, Washington, and Olawale. The lone highlight was the Olawale touchdown run on the first drive.

Any hope of the Raiders making a run at the playoffs was seriously damaged by today’s loss against the Bills. With several tough games to come – including Philadelphia, New England, and Kansas City – to win out is improbable for Oakland.

There continues to be many more questions than answers when it comes to this 2017 Oakland Raiders football team.