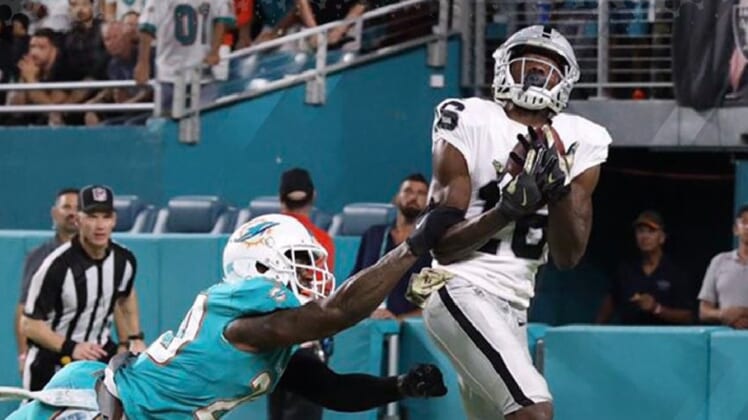 Badly in need of a win heading into their bye week, the Oakland Raiders get the job done in South Florida as they net a victory against the Miami Dolphins.

It wasn’t always pretty but the Oakland Raiders (4-5) overcame inconsistencies on both sides of the ball for a hard-fought win over the Miami Dolphins 27-24 at Hard Rock Stadium in Miami.

In yet another must-win game of what has been a disappointing first half of 2017, the Raiders, behind their stout offensive line, found their running game after a sluggish first half. Not only that, but Marshawn Lynch finally got off the snide and rushed for 57 yards on 14 carries including – two touchdowns – allowing for Oakland to open up its offense to do what it does best. Head Coach Jack Del Rio said during the post-game that he had wanted to increase the number of rushing attempts and make sure they ran the ball 30 times. Oakland rushed the ball 27 times overall.

Although they held a 10-9 lead at halftime, the Raiders looked confused and lethargic on defense much of the first half. In fact, everyone’s favorite quarterback to mock Jay Cutler started the game going 11-for-11 with a touchdown. The Raiders defense regressed and made Miami’s bottom feeder offense look playoff ready. Cutler finished the night 34-of-42 for 311 yards and three touchdowns.

The sloppy game, which including 21 penalties called, also saw quarterback Derek Carr look more confident and successful. Carr ended the night 21-of-30 for 311 yards, one touchdown and one interception. Carr’s favorite target on the night was tight end Jared Cook. Cook had a monster night and set the pace early on hauling in eight passes for 126 yards – an almost 16 yards per catch average.

Carr’s first big play on offense came with 4:02 left in the second quarter as the quarterback found the speedy Johnny Holton on a deep crossing pattern. Holton caught the pass in the endzone for a 44-yard touchdown to give the Raiders a 10-7 lead. It was only Holton’s second reception of the year.

The Oakland defense had what could best be described and up-and-down night. They did make the awful Miami offense look good most of the night, but did again keep the Raiders in the game when they needed to. After the offense stalled in the first half, the defense held on the first series of the second half. That seemed to at least stall the Dolphins defense enough to swing some momentum the Raiders way. The Raiders then scored on Lynch’s first touchdown on the game to extend their lead to 10 points at 20-10.

Although the defense can drive Raider Nation crazy with its loose pass coverage, the unit continues to keep Oakland in games enough to give Carr and the offense enough chances to win. Unlike other weeks when the Raiders offense didn’t capitalize, tonight in Miami they did.

“It’s nice to start the second half with a win,” said Del Rio. “I thought there was some moments of good complimentary football, the kind we’ll need to play in the second half of the season.”

Del Rio specifically mentioned the start of the second half with the Raiders defensive stand followed by the Lynch touchdown on the other end.

The Raiders enter their bye week at an opportune time. They will return to the field in two weeks for a “home” game in Mexico City against the New England Patriots.

The team will hold its official Las Vegas stadium groundbreaking on November 13 on the stadium site.