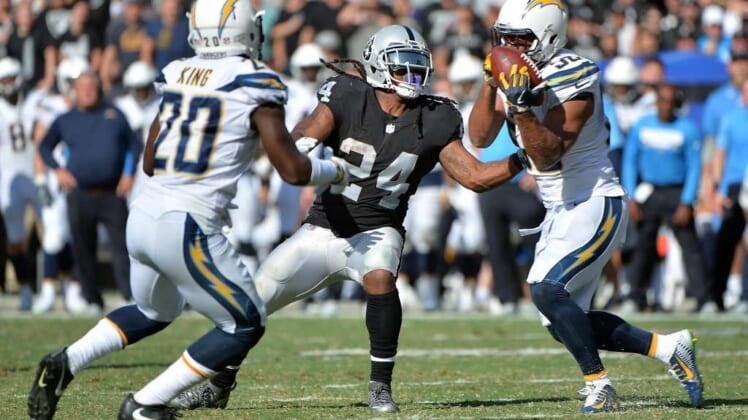 After a 2-0 start, the Oakland Raiders continue to go backwards and lose a close game to the lowly Los Angeles Chargers.

Late in their 17-16 loss to the NFL’s most disorganized, laughingstock of a team, the Raiders defense fought valiantly. Although the Chargers successfully drove to set up the game-winning field goal, the Raiders defensive squad wasn’t perfect but it sure did all it could to keep them  in the game.

The Chargers embarrassed the Raiders at home to bump them to 2-4.

It was the Raiders offense – one that finished last season near the top of the league – that continues to falter. Rushing back quarterback Derek Carr, and getting a better performance from Marshawn Lynch, the offense could never find a true rhythm and failed too often and sometimes in confusing ways.

Carr, courageously coming back after three fractures in his back that kept him out of last week’s loss, just wasn’t himself. While he had two touchdown passes, he also threw two costly interceptions and his throws often missed their targets. Coupled with some drops, the passing game has regressed and the Raiders keep losing.

Here’s three key observations from the Raiders crushing loss at home to the Chargers:

Perhaps all of the wheels haven’t come off yet, but it’s getting pretty close. The Raiders are driving on three flat tires and they’re running out of gas if the playoffs are still a possibility for them in 2017. Not one person or one facet of the game is to blame. There’s lots of people in the Raiders organization that need to take the long look in the mirror and decide where they go moving forward.

One thing is certain: continuing down its current path, this team is about to go off a cliff from which there is no return.