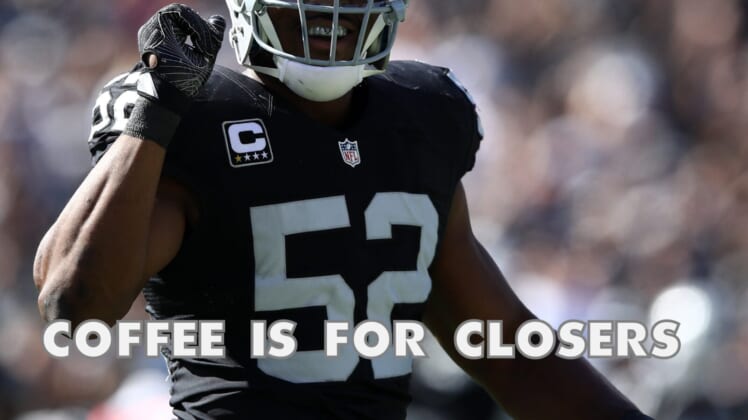 In perhaps one of the most potent and perfectly spoken and delivered monologues in film history, Alec Baldwin, playing the cocky character Blake in the cult classic Glengarry Glen Ross, tells his downtrodden sales force:

“Put. That coffee. Down! Coffee’s for closers only.”

The Raiders defense on Sunday certainly earned a cup of coffee, and a bit more respect from Raider Nation, as they closed out a game on the road in Week 1 of the new season. Even though they played that good, they too haven’t met Mitch and Murray.

Again, following Khalil Mack‘s lead, the Silver and Black defense found its groove in the second half holding the improved Titans offense to leave Music City with a nice 26-16 win.

It started out looking a little bleak for Ken Norton Jr.’s bunch when the Titans seem to march up and down the field in the first half without much resistance. In fact, the Titans started off the game hitting on 5-of-6 third downs almost embarrassing the young Raiders defense. In years past, it could be argued they might have packed it in and relied on Derek Carr and the offense to rescue them. But with an electric offense, and top quarterback in Marcus Mariota, this had to be a complete team game.

Yes, the NFL Twitter General Managers (#TwitterGMs) out there want the defense to fail in order for KNJ to get the axe. Yes, there are parts of Raider Nation who think failure would be good for this franchise.

After early fireworks from Carr and crew, the offense stalled a bit and that’s when the Raiders defense stepped up. The start of the second half was telling and a precursor to how the afternoon would be for the maligned and young Oakland defense. They held the Titans to a pair of punts, and a three-and-out to start the second half. They continued to play well holding the Titans to a pair of field goals the entire second half.

A key play, in our view, was when the Titans marched down to the Raiders 7-yard line and were facing an important 3-and-2. Tennessee gave the ball to bruising back DeMarco Murray who lept in the air only to be stuffed and sent backward by the Raider’s rookie linebacker Nicholas Morrow. It was a big-time play for a young player who stepped up to force the Titans into a field goal try. It also shows this defense is getting better and its younger players can make plays when the team needs them.

As we have said numerous times on the Las Vegas Raiders Report Podcast: all this defense needs to do is be middle of the road this season. If they can jump 10 spots from 26th to 16th, or a bit higher, it’s enough to put this team into championship contention. Yes, the NFL Twitter General Managers (#TwitterGMs) out there want the defense to fail in order for KNJ to get the axe. Yes, there are parts of Raider Nation who think failure would be good for this franchise.

The play of the Raiders defense will be analyzed all week long – and we’ll take a longer look at it in this space as well – but for me, this was a day where we saw progress. And at this point, all of Raider Nation should be happy with that.