First round completed, Collin Morikawa stays on top at Memorial

Collin Morikawa continued to lead the Memorial Tournament after the completion of the weather-delayed first round on Friday at Dublin, Ohio.

Morikawa carded a 6-under-par 66 on Thursday to hold a one-stroke lead over Adam Long, Scottie Scheffler and Chris Kirk at Muirfield Village Golf Club. Kirk had pulled even with Morikawa before recording a bogey on the final hole.

Half of the 120 golfers completed the first round on Friday due to weather issues. Play was suspended at 6:41 p.m. ET on Thursday.

Morikawa collected seven birdies and one bogey during his strong opening round that began on the back nine. He made the turn at 2-under after a bogey on 18 before sinking birdies on four of the next five holes.

Morikawa said Thursday the weather certainly had an effect on his low round.

“It was definitely the rain. The greens were soft enough and they’re receptive,” Morikawa said. “Wedges are spinning back and I actually didn’t see any of that the past couple of days warming up or practicing. But you have to hit the fairway. Out here, wet rough, it’s not going to help when the rough is pretty long. So you got to hit fairways and that’s where it’s going to start and I was able to do that today.”

Long had six birdies and one bogey in his solid round. He had four birdies on the front nine with his lone blemish being the bogey on the par-4, 14th hole. 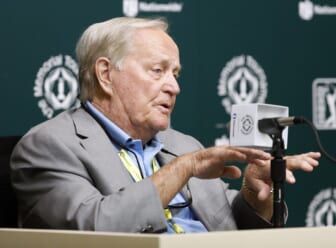 Also Read:
Play at Memorial suspended due to dangerous weather

“It was nice to have a lot of birdie opportunities and good looks and it’s in such good shape that if you can give yourself enough birdie chances that some of them are going to go in,” Long said.

Taylor notched an eagle on the par-5, No. 5 and also had three birdies and a bogey. Schauffele and Cabrera Bello each had five birdies and one bogey, while Hoag posted six birdies and two bogeys.

Justin Thomas, Rickie Fowler, Patrick Cantlay and defending champion Jon Rahm of Spain were among a pack of golfers who shot 3-under 69.

Bryson DeChambeau carded a 71, Northern Ireland’s Rory McIlroy a 72 and Jordan Speith limped to a 76.

Matt Kuchar withdrew after 14 holes due to a left forearm injury. He was at 9-over with a scorecard that included one eagle, one birdie, six bogeys, one double-bogey and one quadruple-bogey.