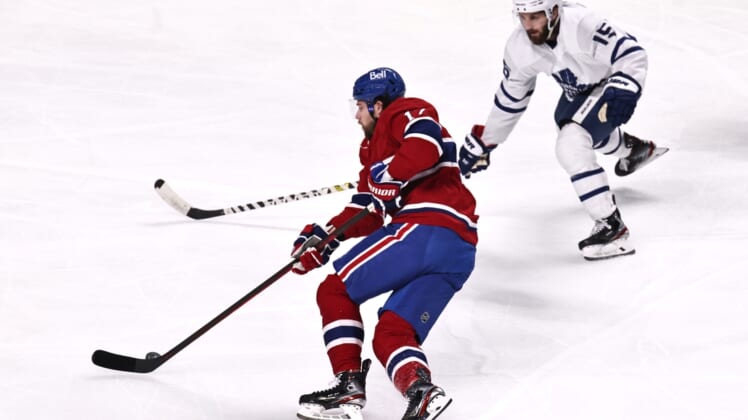 Jason Spezza and Morgan Rielly each had two assists and Jack Campbell made 32 saves as the Toronto Maple Leafs recorded a 4-1 road victory over the Montreal Canadiens on Wednesday.

The Leafs (31-13-5, 67 points) have won three consecutive games, and this one made them the first team in the North Division to clinch a postseason berth.

Montreal (21-18-9, 51 points) still has a six-point lead on the idle Calgary Flames for the division’s fourth and final playoff spot, but the Habs are only a 4-9-0 record in their last 13 games.

The Canadiens outshot the Leafs 33-29, but they could manage only the one goal against Campbell. He came up particularly big in stopping a Joel Armia breakaway chance midway through the second period.

The Maple Leafs needed just 1:38 to establish a lead, as Nylander scored a power-play goal to cap off a nice passing play.

Matthews displayed some outstanding hand-eye coordination in collecting his league-leading 35th goal. The star forward corralled a deflected Nick Foligno pass out of the air, then quickly fired a shot that banked off the goalpost and into Montreal’s net.

Muzzin’s point shot at 6:27 of the second period deflected off the stick of Canadiens defenseman Jon Merrill and past goalie Jake Allen, resulting in Muzzin’s third goal of the season.

Allen stopped 25 of 29 shots, and his puck-handling error led to the fourth Toronto score. Spezza jumped on the loose puck behind the net and passed to Brooks with 11:45 left in the game.

Joe Thornton became the seventh player in NHL history to reach the 1,100-assist plateau when he assisted on Muzzin’s goal.

The Leafs are 5-2-0 against the Canadiens this season.