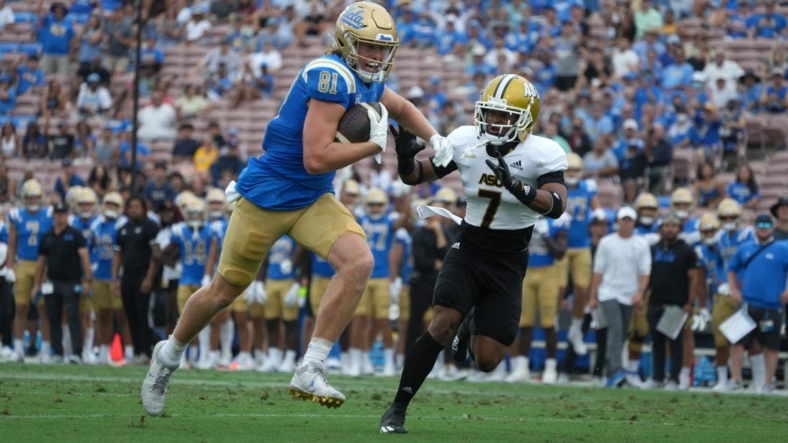 Ethan Garbers replaced Dorian Thompson-Robinson at quarterback early in the second quarter and ran for two touchdowns before halftime to help UCLA pull away for a 45-7 win against Alabama State on Saturday afternoon in Pasadena, Calif.

Thompson-Robinson appeared to sustain a leg injury while making a shovel pass, and Garbers finished off the 11-play, 70-yard drive by scoring on a 5-yard run for a 21-7 lead with 10:39 left in the opening half.

The drive was kept alive three plays earlier when Alabama State was penalized for roughing the passer on third down.

Garbers added his second touchdown run from 2 yards out to make it 31-7 with 1:02 remaining in the half.

Alabama State (2-1) began the game with a long drive, but it stalled after 10 plays when Myles Crawley threw an incomplete pass on fourth-and-3 from the UCLA 32-yard line.

The Bruins took over and Thompson-Robinson completed four straight passes to start the drive and get into the Alabama State red zone.

A defensive pass interference penalty gave UCLA the ball on the 2-yard line and Keegan Jones ran into the end zone on the next play to give the Bruins a 7-0 lead with 7:58 left in the first quarter.

UCLA’s defense then came up with a big play when Crawley was sacked and lost a fumble at his own 25.

On the next play, Hudson Habermehl caught a 25-yard touchdown pass from Thompson-Robinson to stretch the lead to 14-0 with 4:53 remaining in the opening quarter.

Alabama State strung together another long drive and this time the Hornets finished it off on a high note.

Crawley found Jeremiah Hixon over the middle for a 21-yard touchdown pass to cap the eight-play, 60-yard drive and cut the lead to 14-7 with 13:53 left in the first half.

Crawley completed 16 of 27 passes for 177 yards and a touchdown and interception.