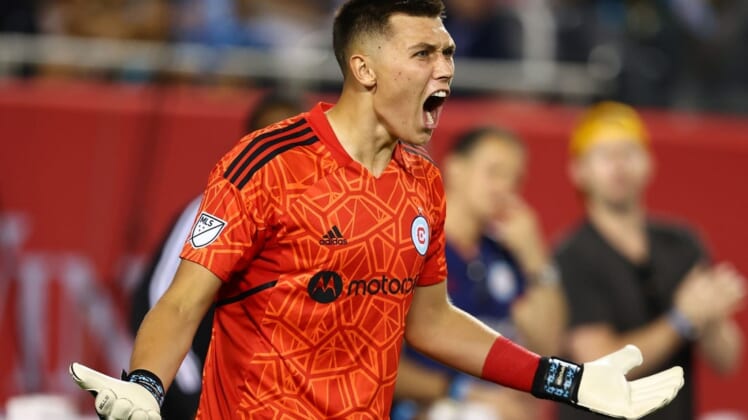 The 18-year-old homegrown player will remain with the Fire on loan for the rest of the 2022 MLS season.

Slonina becomes the youngest player in Chicago history to sign with a club in a top-five European league.

“We’re very proud and happy to see Gaga reach this milestone moment in his career,” Fire sporting director Georg Heitz said. “Since joining the Club, Gaga has embodied what it means to be a Chicago Fire player. In addition to his incredible talent, he is mature beyond his years, extremely hard working, and a fantastic teammate. Gaga is a role model to many young aspiring footballers in Chicago, and this transfer demonstrates that a player can progress to the first team from our Academy before joining one of the biggest clubs in the world.”

Slonina signed with Chicago at 14, becoming the second-youngest signing in MLS history behind Freddy Adu with D.C. United in 2004.

“I joined this Club with ambitions of playing at the highest level and it’s been a dream come true to wear the Chicago Fire jersey,” Slonina said. “This Club has become my second home, my second family, and there are so many people that have played a big role in helping me get to where I am today. I’m so thankful for all the support that I’ve received from my family, coaches, teammates, and everyone associated with the Club. It’s been an incredible honor to work alongside each one of you.”

Slonina made his first start for Chicago at age 16 on Aug. 4, 2021, in a 0-0 draw with New York City FC, becoming the youngest goalie in MLS history to notch a start, a win and a clean sheet. He finished the 2021 season with four shutouts in 11 starts.

Slonina has 10 clean sheets through 23 starts in 2022. The Fire return to action on Saturday at Charlotte FC.