Finally off the schneid, Flyers have quick turnaround vs. Coyotes 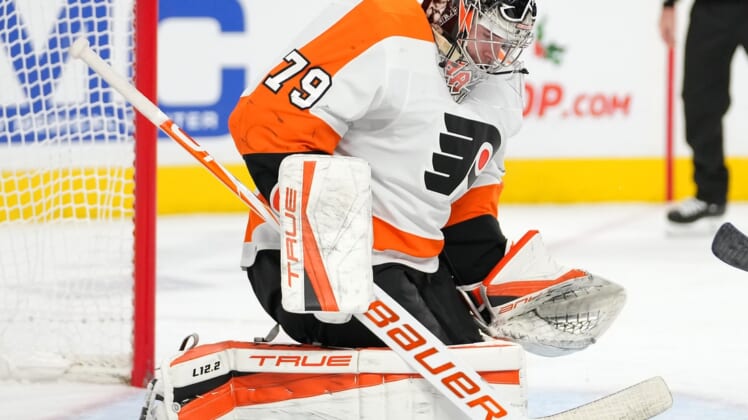 The Philadelphia Flyers haven’t had much to celebrate since their last win on Nov. 16.

After a thrilling 4-3 win on the road against the Vegas Golden Knights Friday, the Flyers gathered around goaltender Carter Hart for good reason. Hart made a season-high 41 saves and helped snap a 10-game losing streak.

The Flyers will look for their second win in a row when they visit the Arizona Coyotes on Saturday.

“It’s been tough on the fly to adapt,” Hart said on a postgame interview on NBC Sports Philadelphia. “Changes are good for our group. Guys are buying in. It was a big two points.”

Hart played arguably his best game all season. The same can be said for the Flyers as a team.

Strong defense and stellar goaltending can mask a lot of issues.

“I try to stop the puck one puck at a time,” Hart said matter-of-factly.

In the offseason, general manager Chuck Fletcher shook up the roster. Between injuries to key players such as Kevin Hayes and Ryan Ellis, COVID-19 and some lackluster play, the Flyers had really been scuffling.

“Two of our coaches got let go, but at the end of the day, it’s not on them,” captain Claude Giroux said. “It’s on our group — players, coaches, everybody that’s involved with us playing hockey. It’s the business side of it, it’s not fun, but right now it’s got to be a wake-up call for us.”

The Flyers received a balanced scoring effort against Vegas with Max Willman, Sean Couturier, James van Riemsdyk and Hayes each recording one goal.

Hart did the rest.

“We’re just trying to build off of this,” Hart said.

The Coyotes will look to avoid a fifth consecutive loss when they host the Flyers.

In their most recent game on Friday, the Coyotes fell 3-1 to the Florida Panthers. Phil Kessel scored the lone goal for the Coyotes.

“We played probably against the best team in the NHL, and after the third goal, they didn’t generate a lot,” Arizona head coach Andre Tourigny said. “We played really well defensively and we had our own chances. Unfortunately, it’s not enough, but there’s a positive in that game.”

The Coyotes have won only two home games and five overall. Their poor record isn’t necessarily connected with a lack of effort. They’re simply not executing.

“We’re chasing wins,” Tourigny said. “We want to win games, and we need to take positives of games, build on that and learn from a few mistakes.”

The Coyotes have scuffled badly on the power play, recently going through a maddening 0-for-17 stretch overall. Arizona’s last power play goal before Kessel’s tally came all the way back on Nov. 16.

“We can practice as much as we want. When our guys are going on the power play, they know it might be the only one of the game,” Tourigny said.