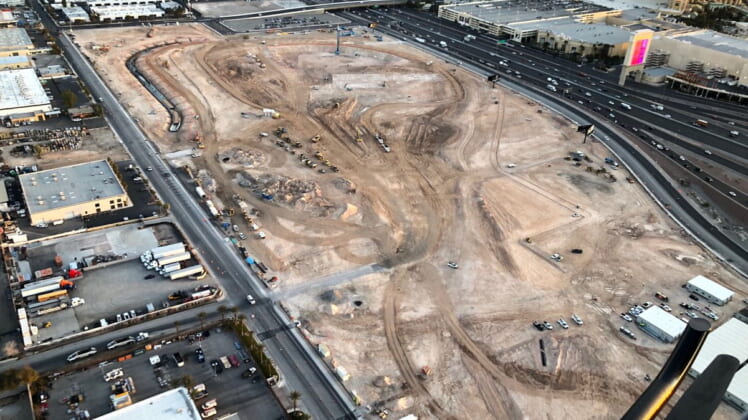 Big milestones in the construction of the Oakland Raiders new stadium in Las Vegas are on the agenda over the next several weeks.

Thursday’s Las Vegas Stadium Authority Board meeting should settle once and for just how much the Oakland Raiders sparkling new 65,000 seat facility near the famed Las Vegas Strip should cost the team and taxpayers in Clark County.

The guaranteed maximum price (GMP) is the estimate of the total cost of construction of the stadium project. It will be discussed at the meeting in what is a pivotal moment for the team and the stadium development.

When the first cost estimate was developed just over two years ago, it stood at $1.8 Billion. Toss in the $100 Million for the Raiders new training facility and team headquarters in Henderson, and the total comes in at $1.9 Billion. Again, those were estimates used to secure the legislation required (Senate Bill 1) to put in $750 Million in new tourism taxes passed by the Nevada Legislature in 2016.

The guaranteed maximum price of the stadium will be discussed at Thursday’s Las Vegas Stadium Authority Meeting.

Thursday, we will get an actual – and updated – estimate. While no one is anticipating a higher cost, crazier things have happened. From all indications, the Raiders and the Las Vegas Stadium Authority (LVSA) anticipate the cost to be perhaps on target or a bit lower based on the project thus far. Getting the final GMP nailed down is crucial as the Clark County Commission must vote April 3rd on a general obligation revenue bond ordinance. This will allow the County to issues bonds to pay for the $750 Million in costs agreed to in 2016. The bonds issued will be paid off, including interest, by the 0.88-percent tax charged as part of the County’s hotel room tax.

That tax money is already being collected with over $45.3 Million already secured. The projections for how much would be generated by the tax have been running ahead of initial estimates. This despite a downturn in collections after the 1 October shooting last year. So far the tax collection is just over six percent over projections. The revenues for January did see a sharp rebound as $4.7 Million was collected which if four percent above previous projections. At the last Las Vegas Stadium Authority meeting, staff did say February’s projections were on a record pace so there was no concern about the fund staying above projections for the rest of 2018.

Clark County staff has said revenues already generated are adequate to handle debt-service obligations and a reserve has been established to address any shortfall.

Bonds to fund the project would be sold in late April.

Next Up: NFL Owners

Once the Las Vegas Stadium Authority finalizes the GMP and other documents, the NFL Owners Meeting is up next. The team must present its plan to the rest of the league for final NFL approval. The Raiders will then take any feedback, or address any concerns or issues, back to the Las Vegas Stadium Authority Board for a last chance at editing and changes.

There are no expected issues when Raiders owner Mark Davis presents the plan to fellow owners.

As always, the Las Vegas Raiders Report staff will be live at the Las Vegas Stadium Authority Board meeting to bring you the best analysis and information. Stay tuned to our site, Facebook page, and Twitter handle for the most up-to-the-minute information on the soon-to-be new home of the NFL’s Raiders.