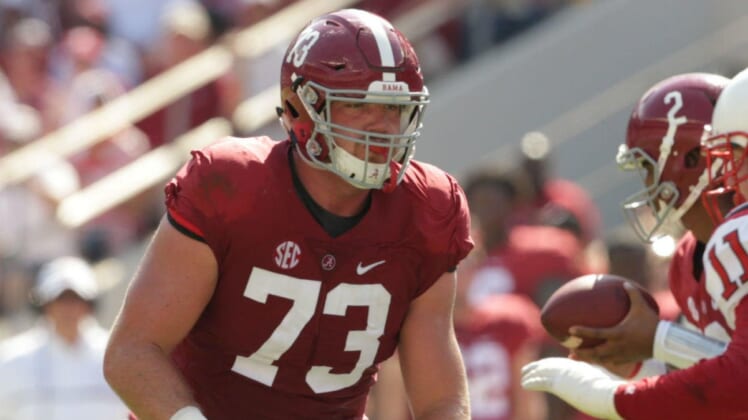 Yes, it’s almost time to kill the mock draft for 2019 as we approach Thursday’s NFL Draft. Our own Scott Gulbransen takes a different approach using the predictive draft model.

Are you as sick of mock drafts as I am? I’m sure you are. We’re all guessing but we’ve had a lot of listeners on our CBS Sports Radio show (Sunday’s 8-10am PT on 1140-AM or Radio.com) and on social media asking us to do one more.

While Kelly Kriner is our in-house draft expert, I’ve had requests to share my own mock draft as we approach the Raiders big day on Thursday. Using the Draft Network’s mock draft tool, I took an aggressive and non-traditional approach to the exercise which yielded some surprising direction for Jon Gruden and Mike Mayock. While some of the picks may be ridiculed or dismissed, my intent was to address the team’s needs but not just do another draft you’ve already seen.

The NFL Draft is always filled with surprises and unexpected twists and turns. So here’s mine – for better or worse. Note: as most of you know, the Draft Network tool doesn’t allow for trades and automates the other team’s picks via a predictive model.

With Quinnen Williams already gone in this draft scenario, I went with EDGE here and Allen. Allen has all the tools needed to be successful in the NFL and would be an excellent addition to the Raiders who sorely need the outside presence.

With Williams still available at No. 24, I couldn’t pass up on the talented offensive tackle. Yes, the Raiders selected two offensive tackles last year in Kolton Miller and Brandon Parker. Despite that, you don’t pass on a talent like Williams if he’s still on the board. The “draft for need” is a myth when an athlete as talented as Williams is there.

There’s no doubt Jacobs may be a reach at No. 27. But everything we’re hearing is Gruden and Mayock are high on the running back and may overlook his lack of being a featured back because his upside is big. As our own Chaz Osborne, an NBA scout for over 10 years, said: if your guy is there and you’re not sure he’ll be there later – you grab him.

Collier is an underrated EDGE player who the Raiders are extremely high on, according to our own Hayden Nadolny. What’s not to like? Collier was a late bloomer at TCU starting just his senior season but has caught the eye of several NFL squads. His ability was on display in the team’s Alamo Bowl game against Stanford and his combine and team meetings have bowled people over. The Raiders are no different. If there at 35, the Raiders could bring in their second game-changing EDGE.

While many think the Raiders may choose a TE early in the draft (in my mock, none of the top selections were available), why? Warring may have not been featured in the Aztecs offense, but he’s quickly captured the attention of NFL scouts and teams. He has excellent blocking ability, can catch and run, and in Round 4, could be a steal. He’s no longer under the radar but if available at 106, the Raiders may have their TE of the future. He may take a few seasons to reach his full potential, but this could be a real dark-horse pick for Gruden and Mayock.

The pick acquired in the Kelechi Osemele trade with the New York Jets allows the Raiders to grab another WR. Boykin turned heads at the NFL Combine this year when he ran a 4.42 in the 40, notched a 43.5-inch vertical leap, and measured 11 feet 8 inches in the broad jump. That performance catapulted him up draft boards throughout the league. While he’s a raw player, he’d be a great addition on Day 3 for Oakland.

For over six months, I’ve heard Kelly Kriner extol the virtues of the wide out. Dortch would be a great get here late in the draft. The only reason he would slip this late in the draft is due to a wrist injury which has many concerned. But with his explosiveness and pure athletic ability, he’d be a no-brainer here.

While my fellow Silver and Black Today teammates say I’m crazy, Finley has been one of my top QB prospects dating back to last season. I highly doubt he’ll fall this late, but if he did, he’d be a great selection as a developmental prospect to serve as the long-term backup to Derek Carr. According to reports, Finley is very high on Bill Belichick’s radar so the Raiders may have some stiff competition for the signal caller.

There were some surprises – and maybe a reach or two – here but you never know what happens during the draft. If this scenario played out, it would bode well for the rebuilding Raiders.

Be sure to listen to the Silver and Black Today crew as they co-host the CBS Sports Radio 1140 NFL Draft Special covering the entire first round of the NFL Draft on Thursday. We’ll have in-depth coverage, interviews, and more on the Raiders historic first-round haul. You can listen anywhere in the world via the Radio.com app.