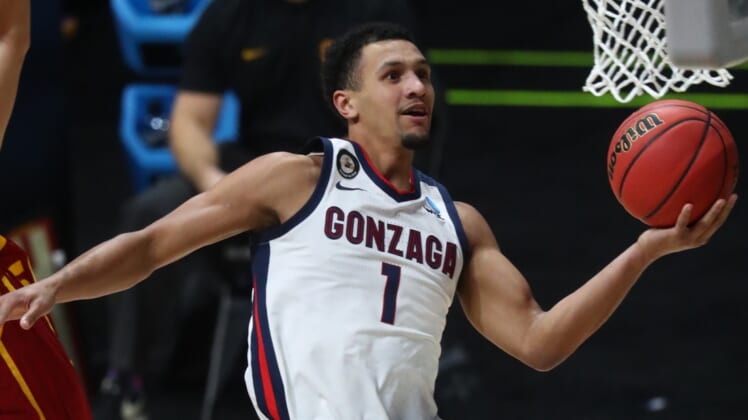 Mar 30, 2021; Indianapolis, IN, USA; Gonzaga Bulldogs guard Jalen Suggs (1) goes up for a shot against the Southern California Trojans during the first half in the Elite Eight of the 2021 NCAA Tournament at Lucas Oil Stadium. Mandatory Credit: Mark J. Rebilas-USA TODAY Sports

The role reversal is rife with irony leading up to Saturday’s Final Four tilt between UCLA and Gonzaga.

UCLA is the brand name, the program with 11 NCAA Tournament titles in its trophy case. Yet, the 11th-seeded Bruins (22-9) find themselves in the role of heavy underdog as only the second team to go from the First Four to the Final Four.

Gonzaga and coach Mark Few have been steadily clawing for years to reach the powerhouse level UCLA has enjoyed. The Bulldogs have yet to win a title, but are 14-point favorites by FanDuel and 14.5-point favorites by DraftKings to end the Bruins’ unlikely run.

Not only are the Bulldogs trying to become the first team since Indiana in 1976 to be crowned an undefeated national champion, Gonzaga is riding a Division-I record of 27 consecutive double-digit victories.

The Bulldogs have won 34 consecutive games overall dating back to last season.

The Over/Under for Saturday’s game has been set at 145.5 by both sportsbooks. The handle has been evenly split at DraftKings while the Over has been backed by 52 percent of the money at FanDuel.

In the tournament, UCLA already knocked off a No. 1 seed in Michigan and a No. 2 seed in Alabama. Meanwhile, Gonzaga cruised through its first four games.

“It’s such a beautiful thing, the way that we have come together for this postseason,” said UCLA’s Johnny Juzang, who is averaging 21.6 points in the five wins. “It’s just a feeling of everybody’s just so unified. It’s like one unit, and we’re just all sharing in each other and rooting for each other. I think that’s why we’re at this point.”

The Final Four stage is exactly where Gonzaga point guard Jalen Suggs — likely off to the NBA after his freshman season ends — was aiming to be when he chose the Zags.

“It’s hard not to think about it,” Suggs said of the possibility of going unbeaten. “We try to keep our minds off of it and keep focused on the task at hand. It’s a great accomplishment. Again, we just come in every day to play to the Gonzaga standard and for each other. We’re not chasing anybody or anything.”

The Bruins and Gonzaga have met twice previously in the NCAA Tournament with the teams splitting a pair of Sweet 16 matchups.

Saturday’s winner will move on to face either top-seeded Baylor or No. 2 seed Houston. The two will meet in Saturday’s first semifinal.

The Bears are 5-point favorites at both sportsbooks. They are being backed by 79 percent of the spread-line bets and 85 percent of the money at FanDuel and 78 percent and 87 percent, respectively, at DraftKings.