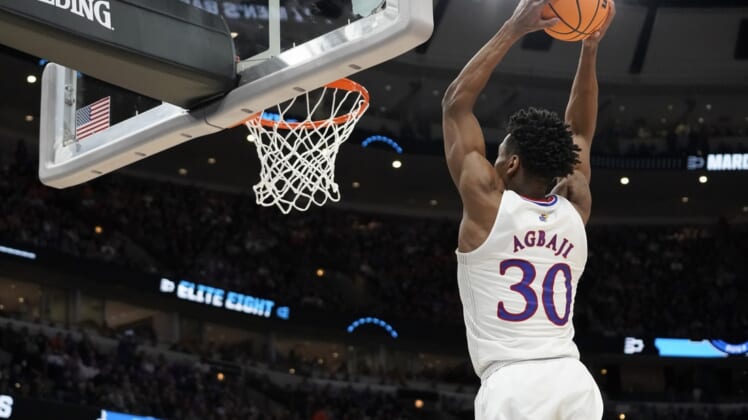 Justin Moore’s torn Achilles has had an impact beyond Villanova trying to figure out how best to replace a team captain and its second-leading scorer.

It also has led to Kansas being a lopsided favorite ahead of the teams’ Final Four semifinal matchup on Saturday.

The Jayhawks opened as 3.5-point favorites at BetMGM but the line moved to 4.5 by Monday, with Kansas being backed by 79 percent of the spread bets and 89 percent of the money. BetRivers reported the same line at their sportsbook had led to 53 and 62 percent of the action, respectively, supporting the Jayhawks as well.

The public has been more split on the trilogy game between ACC rivals Duke and North Carolina.

The Blue Devils were 4.5-point favorites at all three sportsbooks at midday Monday.

The spread bets are nearly an even split at DraftKings, with Duke being backed by 54 percent of the money.

The Blue Devils also have emerged as the favorites to win the national championship.

No. 2 Duke has benefited from three No. 1 seeds going down, and the Blue Devils are now +155 favorites at DraftKings and +160 at BetMGM, where they opened the NCAA Tournament at +1400 to win it all. Duke is also BetMGM’s biggest remaining liability with 9.1 percent of the bets and 11.4 percent of the money in the tournament champion market.

Of the Final Four teams, the eighth-seeded Tar Heels opened as the biggest longshot at +3000 at BetMGM. Villanova (+1200) and Kansas (+1600) were among the pre-tournament favorites.