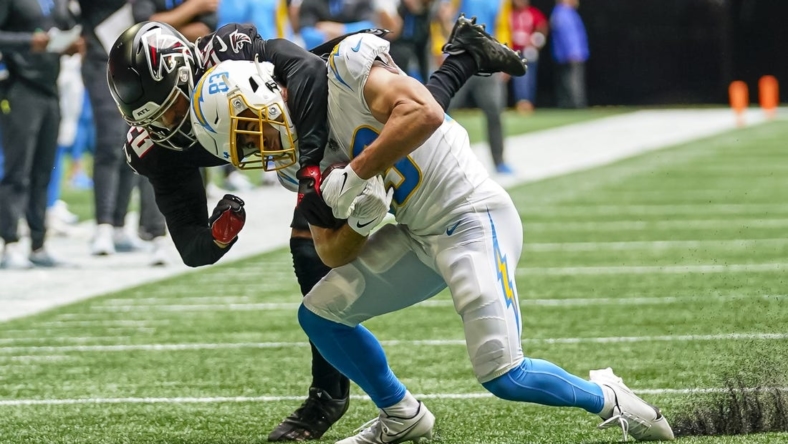 Fill-in kicker Cameron Dicker booted a 37-yard field goal as time expired to give the Los Angeles Chargers a 20-17 victory over the host Atlanta Falcons on Sunday afternoon.

Austin Ekeler rushed for one touchdown and caught another. Justin Herbert passed for 245 yards, one score and one interception as the Chargers (5-3) won for the fourth time in the past five games.

Cordarrelle Patterson rushed for two touchdowns and Marcus Mariota passed for 129 yards for Atlanta (4-5). Tyler Allgeier had 123 yards from scrimmage, including 99 on the ground.

Dicker, who also kicked the tying field goal, was signed to the practice squad on Thursday and elevated to the active roster on Saturday. Regular kicker Dustin Hopkins injured a hamstring in Week 6 and replacement Taylor Bertolet hurt his quadriceps during practice Wednesday.

Three plays later, Dicker kicked a field-goal try through the middle of the uprights for his second game winner of the season. He also had one when kicking for the Philadelphia Eagles in Week 5, his NFL debut.

Ekeler has scored 10 touchdowns (six rushing, four receiving) over the past five games.

Ekeler also became the seventh player in NFL history to have a rushing and receiving score in the same game on 10 or more occasions. Hall of Famer Marshall Faulk is the record-holder with 15.

The Falcons held a 17-14 lead after Patterson powered into the end zone from the 3-yard-line to give Atlanta a 17-14 lead with 3:44 left in the third quarter.

The Falcons had a chance to increase the margin to six but Younghoe Koo was wide right on a 50-yard field-goal attempt with 12:12 to play. Dicker booted a 31-yarder to tie the score with 5:27 remaining.

Atlanta dominated the first quarter with edges of 145-16 in total offense and 9-0 in first downs while building a 10-0 lead.

Patterson capped the game-opening drive with a 1-yard scoring run and Koo added a 29-yard field goal with 52 seconds left.

The second quarter was a complete turnaround as the Chargers held an 11-0 edge in first down and totaled 166 yards to Atlanta’s minus-5.

Ekeler scored on a 2-yard run with 4:38 remaining in the half to get the Chargers on the board. He later caught a 1-yard scoring pass from Herbert with 32 seconds to go for a 14-10 lead.