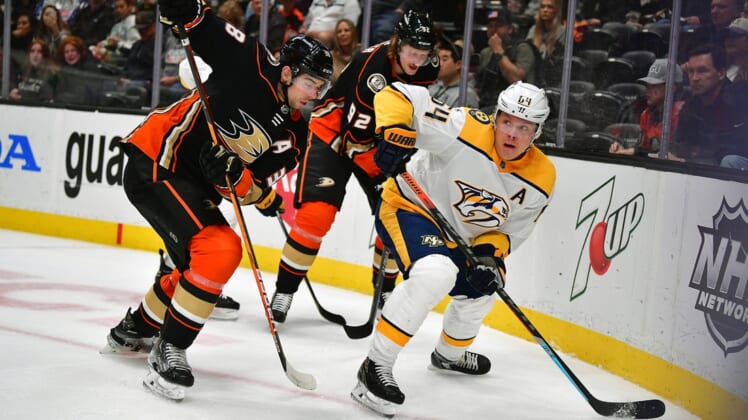 Filip Forsberg earned a piece of Predators history on Monday, recording two goals and three assists to lead Nashville to a 6-3 road victory over the Anaheim Ducks.

Forsberg now has 35 goals, setting a franchise record for a single season. Viktor Arvidsson held the previous mark, having scored 34 goals in the 2018-19 season.

Matt Duchene is also alongside Arvidsson in the record book, as Duchene hit the 34-goal plateau with two power-play tallies on Monday. Duchene’s goal at 3:08 of the third period was a highlight-reel effort, with the forward going between his legs to fire the puck past Anaheim goalie John Gibson.

The Predators also made some team history, setting a club record with their seventh consecutive game with four or more goals. The offensive surge has helped power Nashville to a 7-2-0 record in the past nine games.

Duchene added an assist, setting up Forsberg’s empty-net score late in the third period. It was one of four goals for Nashville in the final frame, after the teams played to a 2-2 score through the first 40 minutes.

Roman Josi and Ryan Johansen each had a goal and an assist for the Predators, while Mikael Granlund had two assists.

The Ducks fell to 0-5-2 in their past seven games, their longest winless drought of the season.

Derek Grant scored twice for the Ducks, with Troy Terry collecting his 30th of the season for Anaheim’s other marker. Trevor Zegras and Kevin Shattenkirk each had two assists.

The Predators were 3-for-5 on the power play. Nashville is an impressive 12-for-39 on the power play over its past 11 games, scoring at least once with the extra attacker in nine of those contests.

Both Josi and Duchene extended their points streaks to 10 games. Josi has 24 points (four goals, 20 assists) during his streak, while Duchene has 20 points (11 goals, nine assists) over his run.