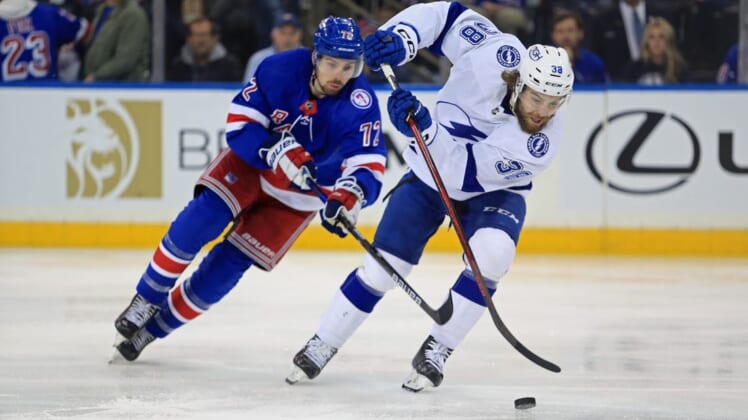 Filip Chytil scored the tiebreaking goal with 9:51 remaining in the second period and added his second goal of the game nearly six minutes later as the host New York Rangers pulled away for a 6-2 victory over the Tampa Bay Lightning Wednesday night in Game 1 of the Eastern Conference finals.

After never taking a series lead in their wins over the Pittsburgh Penguins and Carolina Hurricanes, the Rangers can take a 2-0 series lead on Friday thanks to Chytil’s third straight game with a goal and second multi-goal game in that span.

Chris Kreider scored 71 seconds in and Frank Vatrano scored 7:50 into the second. Artemi Panarin tallied 30 seconds into the third and Mika Zibanejad scored a power-play goal 6:06 into the third as the Rangers won their team-record seventh straight postseason home game.

New York’s Igor Shesterkin made 37 saves and won for the eighth time in 11 games since being pulled in Game 4 against Pittsburgh.

New York scored on its first shot when Kreider lifted a one-timer from the circle over Vasilevskiy’s stick after getting a cross-ice pass from Zibanejad. Stamkos tied it a little over six minutes later when he blasted a slap shot from the right point after getting a drop pass from Jan Rutta.

Vatrano made it 2-1 7:50 into the second by putting a wrist shot from the middle of the slot by Vasilevskiy’s stick but 42 seconds later, Palat backhanded the rebound of a Stamkos shot by Shesterkin.