Fighting for a play-in spot, Spurs and Pelicans clash 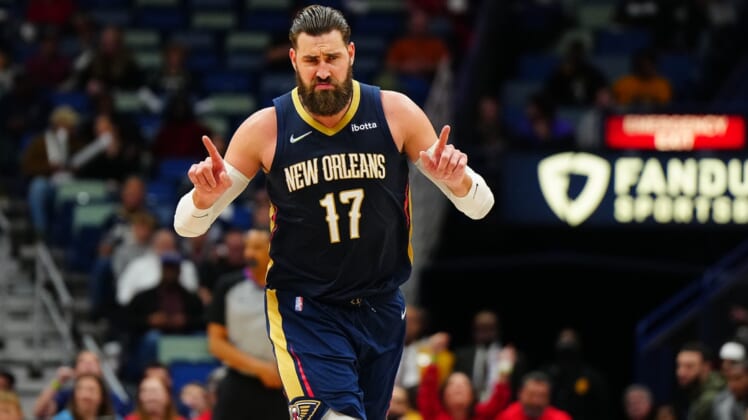 The San Antonio Spurs will host the New Orleans Pelicans on Friday in a late-season Western Conference dustup with huge postseason implications.

San Antonio snapped a two-game losing streak and pulled to within a game and a half of New Orleans in the hunt for a spot in the play-in tournament with a wild 122-120 victory over Oklahoma City on Wednesday.

Lonnie Walker IV hit the deciding 3-pointer with 1.8 seconds to play after San Antonio coughed up a 16-point third-quarter lead and trailed three times down the stretch. Walker’s game-winner was the Spurs’ season-high 19th 3-pointer of the contest.

Dejounte Murray led the Spurs with 26 points and 12 assists in Wednesday’s win, with Keldon Johnson pouring in 22, Walker scoring 20, Josh Richardson tallying 17 and Jakob Poeltl racking up 15 points and 14 rebounds.

Walker said afterward that the final play was designed to get Murray open.

“(Murray) didn’t even get the opportunity to catch the ball, so we had to improvise,” Walker explained. “I knew that the main focal point was going to be DJ, and that I was going to be open somehow, some way.”

The Spurs were 19 of 41 from beyond the arc but shot just 43.9 percent overall from the floor.

“We made 3s, and it bailed us out,” San Antonio coach Gregg Popovich said afterward. “But we were not bailed out by good basketball. The 3s bailed us out, and Lonnie made a hell of a shot at the end.”

Friday’s game is the last of a seven-game homestand for the Spurs, who have split the first six games.

The Pelicans head to Texas after a 131-115 home loss to Phoenix on Tuesday, New Orleans’ fifth loss in its past six games. Herb Jones led New Orleans with 22 points in the loss with CJ McCollum adding 21 as he returned from a two-game absence while in the health and safety protocol.

Jonas Valanciunas racked up 17 points and 12 rebounds and Jaxson Hayes had 16 as seven Pelicans players scored in double figures. New Orleans committed 17 turnovers which the Suns converted into 33 points.

“When we’re playing a team as good as Phoenix, our margin for error is small,” Pelicans coach Willie Green said. “That’s OK. It just means we have to execute even better. We didn’t do it for 48 minutes.”

New Orleans is 5-5 since the All-Star break. Brandon Ingram missed his fifth straight game on Tuesday due to a right hamstring strain and is questionable for Friday’s game in San Antonio.

“We went out and competed tonight,” Green added. “We played hard, but we made some mistakes. We’re grateful to have CJ back, but he’s knocking off some rust as well. It’s just a part of adjusting.”

This will be the third game of the season between the Spurs and Pelicans; San Antonio has won the first two, so this contest will be a consideration in tiebreakers should the squads be knotted in the standings at the end of the regular season.

They will meet again on March 26 at New Orleans.