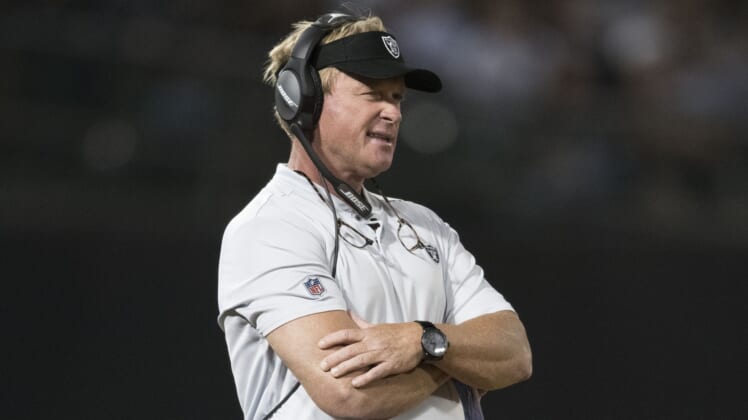 Jon Gruden isn’t immune to the chorus of voices opening wondering if the Oakland Raiders are tanking this season. He simply disagrees with that notion.

On Tuesday, as he announced that the Raiders had cut veteran linebacker Derrick Johnson, who is one of the team’s leading tacklers, he fired back at his critics.

Gruden: “I’ll say this: we’re not tanking anything. I hear the hatred.” Definitely annoyed people are writing or suggesting that’s happening.

It’s hard to take anything Gruden says seriously this year — his continued song and dance about how hard it is to find a pass rusher didn’t help matters. But anyone who’s followed the man throughout his career knows he hates losing.

With that in mind, it’s hard to imagine Gruden is purposefully “tanking,” meaning he’s not trying to throw the season into the garbage pail so he can land a top pick.

Gruden’s own roster management has a lot to do with the team’s current situation, however. He brought in a ton of old players who are in decline, and traded away his top asset for two future first-round picks.

If that doesn’t scream “REBUILDING!” then nothing does.

So, while Gruden might not be intentionally trying to lose games this year, he certainly hasn’t done much to give the Raiders a fighting chance, either.

Now at 1-5 on the season, it’s fair to say the Raiders are among the worst teams the NFL has to offer, if not the absolute worst. Tanking or not, it’s not looking pretty.