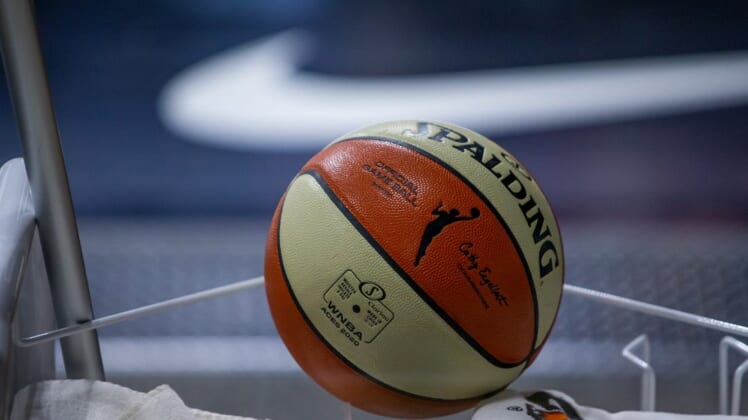 Kelsey Mitchell’s 22 points led five players in double figures Friday night as the Indiana Fever presented Carlos Knox with a win in his first game as the team’s interim coach, a 101-96 victory over the Los Angeles Sparks in Indianapolis.

Rookie NaLyssa Smith and Victoria Vivians added 17 points apiece for Indiana (3-7), which snapped a five-game losing streak in its highest-scoring game of the year. Emily Engstler came off the bench to score 13 points and grab nine rebounds, and Danielle Robinson chipped in 10 points and 11 assists.

Nneka Oguwmike poured in a game-high 30 points and hauled in 10 rebounds, but it wasn’t enough to keep Los Angeles (3-6) from losing for the sixth time in seven games. Katie Lou Samuelson scored a career-high 19 points.

The Sparks also got 13 points and nine rebounds from Liz Cambage, but she made just 2 of 11 field goals against a defense that doubled her from multiple angles. Cambage fouled out in the final minute.

Los Angeles trailed by 18 at one point in the third quarter, but pulled within 95-93 with 1:22 left on a pullup jumper by Brittney Sykes. However, the Fever were able to close the game out with 6-of-8 foul shooting in the final minute and a pair of key defensive stops.

Indiana players surrounded Knox after time expired, celebrating the outcome. Knox, in his second stint with the franchise, was picked to succeed Marianne Stanley after she was fired on Wednesday with the team struggling to find its footing.

The Fever controlled tempo for most of the game, using quickness to get good shots and hounding the Sparks into key mistakes. They took a 26-22 first quarter lead on Destanni Henderson’s driving layup with 1.7 seconds remaining, then expanded the margin to 13 at one stage of the second quarter.

The lead reached 70-52 at the 6:09 mark of the third quarter when Mitchell stroked a 3-pointer, but Los Angeles rallied down the stretch.