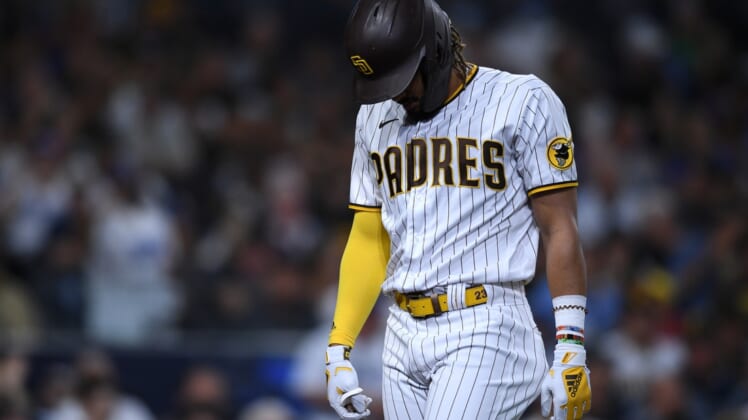 Fernando Tatis’ wrist injury has put a significant damper on his MVP odds and the San Diego Padres’ World Series hopes three weeks before the start of the season.

BetRivers told Field Level Media their oddsmakers moved Tatis from +400 to +650 to win National League MVP honors. He is now third, with NL MVP favorite Juan Soto seeing his odds shorten from +370 to +300.

The impact was even greater at BetMGM, where Tatis’ odds lengthened from +400 to +1000.

Both sportsbooks said the news did not move their World Series or National League pennant odds, but the Los Angeles Dodgers were the biggest “beneficiary” with their NL West rivals taking a big hit.

PointsBet told Field Level Media they shifted the Dodgers from -135 to -160 to win the National League West while the Padres moved from +245 to +275.

Tatis Jr. fractured his wrist during the offseason and will undergo surgery, according to Preller.

Because players and management couldn’t speak during the recently concluded lockout, it’s unclear when the team learned about the injury or what medical care Tatis has received.

The Padres were hoping to have a healthy Tatis for the entire season after a shoulder injury plagued him throughout 2021.

The 23-year-old Tatis had two separate stints on the injured list because of shoulder issues but opted against offseason surgery, instead deciding to undergo rehab with an eye toward becoming a full-time shortstop again. He spent part of 2021 in the outfield to reduce the strain on his shoulder.

Tatis first injured the shoulder in April on a swing, then aggravated the injury in late July on a slide. He played a career-high 130 games in his third major league season and hit a National League-leading 42 home runs. He was third in National League MVP voting.