FC Dallas stays hot at home with win over Rapids 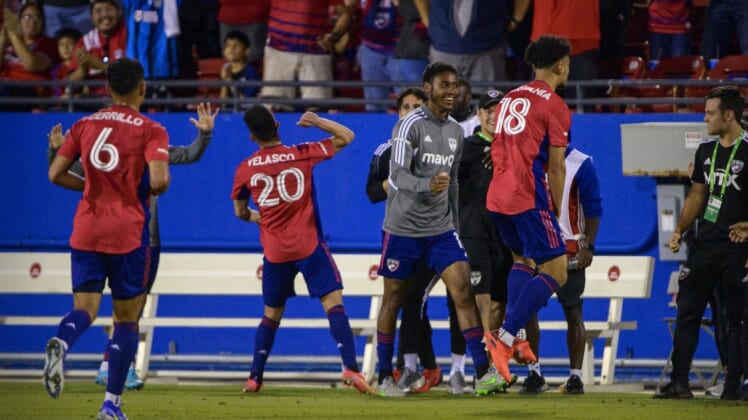 Jesus Ferreira recorded a brace, including the tiebreaking goal early in the second half, to help FC Dallas post a 3-1 victory over the Colorado Rapids on Saturday night at Frisco, Texas.

Brandon Servania added a long-range goal and one assist and Maarten Paes made five saves for FC Dallas (3-1-2, 11 points). Dallas is 3-0-1 at home this season.

Ferreira has five goals on the season. His first tally Saturday came six minutes into the second half and gave FC Dallas a 2-1 lead.

Marco Farfan spotted an open Ferreira, who turned and delivered a right-footed shot into the right corner of the net.

Colorado had a chance to knot the score in the 67th minute but Rubio’s left-footed shot caromed off the right goal post.

The Rapids were pushing for a tying goal late in regulation when FC Dallas gained possession and got an insurance tally in the 89th minute.

Servania spotted a breaking Ferreira and passed him the ball. Colorado goalkeeper William Yarbrough came out to cut off the angle and Ferreira easily eluded him to the left and sent a left-footed shot into the net.

Yarbrough made four saves for the Rapids. Colorado had a 15-7 edge in shots and both teams played six on target.

The Rapids struck first in the 26th minute as Michael Barrios fed Rubio, who sent a right-footed shot into the left corner of the net for his third goal of the season.

It appeared Colorado would take a 1-0 lead into the break but FC Dallas stunningly scored in the second and final minute of first-half stoppage time.

Alan Velasco had the ball and passed it to Servania, who was wide open about 45 yards away from the goal. Servania dribbled in a few steps and unleashed a hard right-footed shot that went over the heads of players on both teams and sailed over the raised hands of Yarbrough for his first goal of the season.

The Rapids earlier had an outstanding chance in the 26th minute when the game was scoreless. On that occasion, Barrios sent a right-footer on goal and Paes made a save with his right hand to thwart the opportunity.