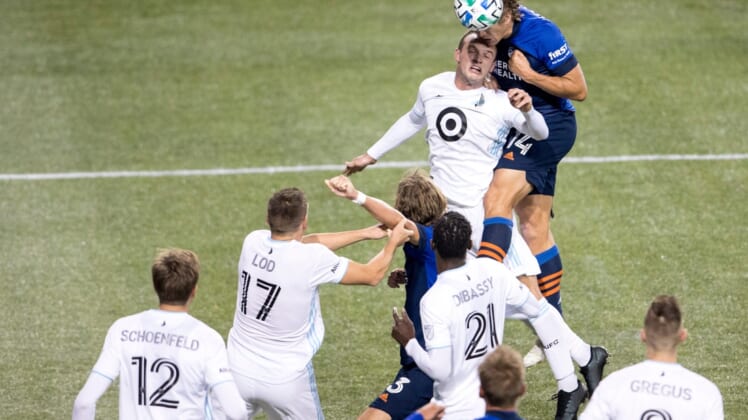 After sweeping a pair of games from Toronto FC over a five-day span, FC Cincinnati will hit the road to play Minnesota United on Saturday night in Saint Paul, Minn.

Both teams enter the contest in playoff position in the early going in their respective conferences.

FC Cincinnati (4-5-1, 13 points), coming off a 2-0 win over Toronto on Wednesday night, is tied for fifth place in the Eastern Conference with New York City FC while the Loons (4-3-2, 14 points), who lost to host Los Angeles FC 2-0 on Sunday, are sixth in the Western Conference.

FC Cincinnati’s start is the best after 10 games in team history. Brandon Vazquez has led the way with five goals this season, with Luciano Acosta scoring four times. Acosta brings a three-game goal streak into the contest.

Head coach Pat Noonan believes there’s still plenty of room for improvement for his team despite the good start.

“Right now, we’re in a good position after 10 games, but not a great position.”

A road win over the Loons would certainly be a big step forward in that regard. Minnesota has won all three of its matches against FC Cincinnati in MLS play by a 10-1 composite score. That includes a record 7-1 win in 2019.

That remains the most goals scored by the Loons in a game and also the team’s largest margin of victory in MLS play.

“Acosta’s got his typical, classic Argentinian, number 10,” Loons coach Adrian Heath said. “He’s had a really good start to the season. They’ve got enough threats to cause you problems. If we don’t respect them or play well enough, it’ll be a difficult afternoon.”