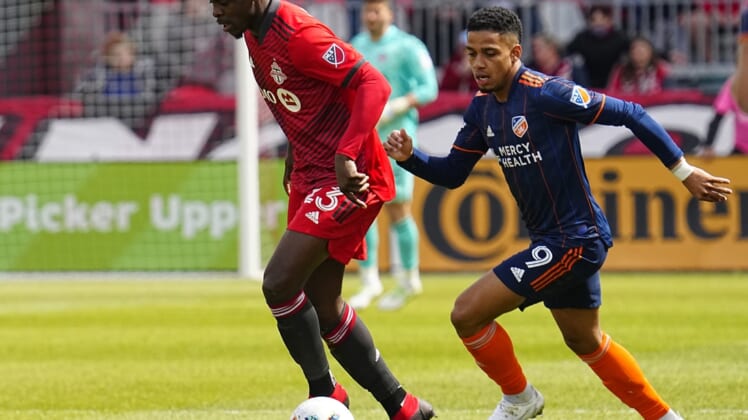 Rookie Ian Murphy recorded his first MLS goal late in the first half and Luciano Acosta scored early in the second, as visiting FC Cincinnati hung on to post a needed 2-1 victory over Toronto FC on Saturday.

Murphy’s milestone score came in the 44th minute off a short corner and a stellar header from Nick Hagglund. Then just seven minutes into the second half, Acosta, via a floating sideline throw-in, maneuvered himself to sidewind a low burner past Toronto goalkeeper Alex Bono (one save).

But, with less than an hour to play in the contest, Toronto FC (3-4-2, 11 points) finally broke through. Via Jesus Jimenez’s seventh, and perhaps most acrobatic, goal of the season, off a perfect header from Shane O’Neill in the 65th minute.

Cincinnati (3-5-1, 10 points), though, stood its ground and didn’t allow the host to record an official shot on goal the rest of the way.

The result halted Cincinnati’s 0-3-1 rut, and was its second all-time at Toronto, which has now dropped two in a row following a 3-0-1 run. Toronto’s three-game home winning streak also came to an end.

Toronto held a majority of the first-half possession, and got the first two solid scoring chances of the day. First, through Jayden Nelson in the seventh minute and then via Jonathan Osorio in the 37th. However, Roman Celentano (two saves), making his second consecutive start in Cincinnati’s net, was up to the challenge.

Meanwhile, Cincinnati’s best early first-half opportunities missed wide or severely high of the Toronto net. Yet, it was Cincinnati that eventually scored the lone goal of the opening half through defender Murphy.

Acosta’s goal was his second in as many weeks for Cincinnati.

Meanwhile, Toronto has been one of the most generous teams in MLS, conceding 19 goals on the season. It didn’t help matters that Toronto lost defender Chris Mavinga to an injury near the half-hour mark of this contest.

In a quick turnaround, these sides will meet again Wednesday night at Cincinnati.