FC Cincinnati rolling with scuffling Fire up next 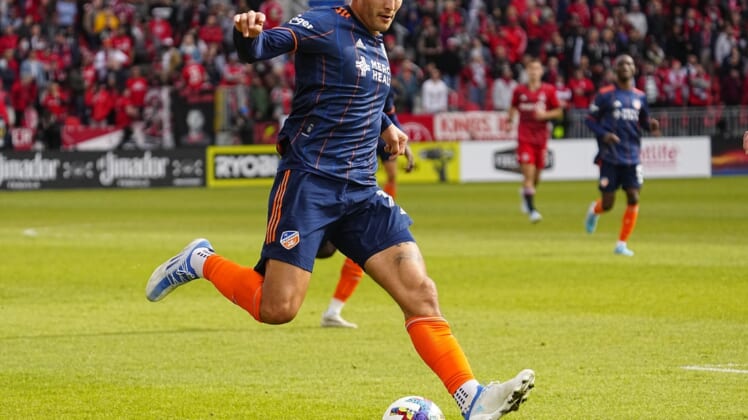 FC Cincinnati is now alive, well and amid the most successful stretch of its four-year MLS tenure.

Meanwhile, a promising start to the season for the Chicago Fire has turned sour.

After being outscored 8-4 during an 0-3-1 rut, Cincinnati (5-5-1, 16 points) now owns a 5-1 scoring edge, and recorded back-to-back shutouts, during the club’s first-ever three-game MLS winning streak.

Although FC Cincinnati fell 5-1 to the New England Revolution in U.S. Open Cup play this week, they return to league action confident to continue their historic run.

“We have a few more answers (than earlier in the season), when we were, in a lot of ways, still figuring out who we were,” Cincinnati coach Pat Noonan said. “I expect that we will use (the U.S. Open Cup loss) as a learning tool, but also as motivation to right the wrong quickly.”

Last in the Eastern Conference, the Fire (2-4-4, 10 points) have totaled seven goals all season and are mired in an 0-4-2 rut following consecutive wins over D.C. United and Sporting Kansas City in March.

Chicago conceded two goals through its first seven games, but been outscored 9-2 during its three-game losing streak.

The Fire trailed 3-1 after 36 minutes during last weekend’s 4-1 loss at Atlanta United.

“Everybody wants to be here and everybody believes in what the coaches are implementing within the group,” Chicago forward Victor Bezerra said.

“If there’s negative losses, it only causes us to train harder and try to correct what we’re doing on the field.”

In his first season with the Fire, Xherdan Shaqiri is tied for the team lead with two goals, matching Kacper Przybylko.

The Fire and FC Cincinnati are an even 2-2-2 against each other in six all-time contests.