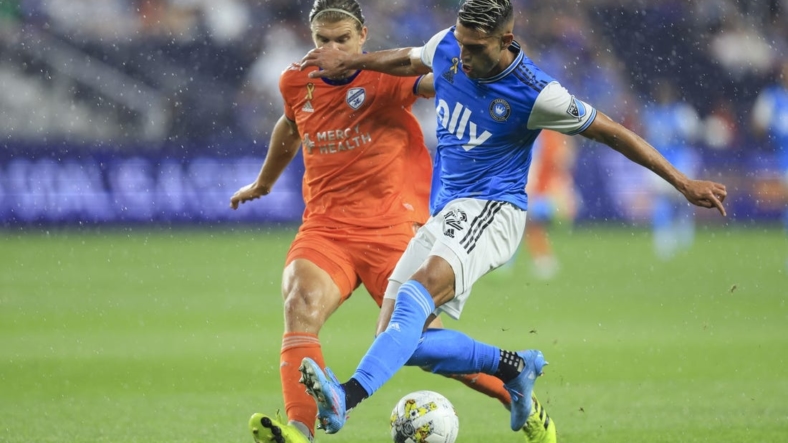 Goals from Nick Hagglund and Luciano Acosta led FC Cincinnati to a 2-0 victory over visiting Charlotte FC on Saturday.

The win moved Cincinnati (9-8-11, 38 points) over the playoff line and into seventh place in the Eastern Conference. FC Cincinnati is looking for its first playoff berth since joining MLS in 2019.

Cincinnati is 2-0-5 over its last seven games, its longest unbeaten streak as an MLS team.

Charlotte FC (10-17-2, 32 points) remains in 12th place in the Eastern Conference, missing a chance for critical points in their fading playoff push. First-year Charlotte is 2-7-0 in its last nine games.

Both halves on Saturday followed a familiar script for FC Cincinnati. After generating virtually no attack in the first 30 minutes, they upped the pressure in the next 15 minutes, resulting in two goals.

Following a corner kick in the 38th minute, Hagglund got the key touch on a loose ball in front of Charlotte’s net. It was the defender’s first goal of the season.

A shaky clearance attempt led to Cincinnati’s next goal in the 81st minute. Yuya Kubo forced a turnover deep in Charlotte FC’s end, and Kubo found Acosta in front for Acosta’s seventh goal of the season.

Acosta also picked up a costly yellow card late in the game. The midfielder will now miss FC Cincinnati’s next game (at New York City FC on Wednesday) due to caution accumulation.
FC Cincinnati goalkeeper Roman Celentano made two saves for his fourth shutout of the season.

Nuno Santos made his MLS debut, entering the game as a substitute in the 68th minute. Charlotte signed the midfielder from Benfica in Portugal in early August.