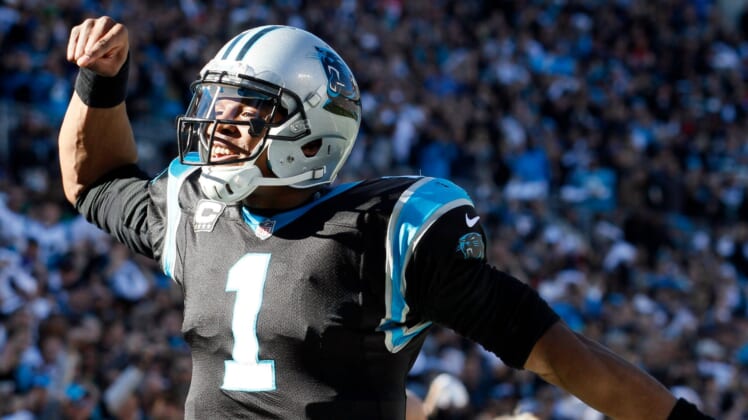 The Cam Newton narratives are more than played out at this stage, being utilized on and endless loop of irrelevancy. Ankle surgery, a broken rib, no rapport with his receivers; anyone with a keyboard can find a negative in Newton’s fantasy potential.

Newton will succeed again in Carolina, Courtesy of sportsalamode.com

Yet what has truly changed about the fourth-highest scoring player in fantasy football in 2013? There was no depth at receiver last season, one could even argue that Kelvin Benjamin and Jerricho Cotchery is a better pairing than Steve Smith and Brandon LaFell. Greg Olsen, Newton’s rock and potential fantasy redeemer, is ready for another productive season in Carolina. The team’s run game is ready to go with Jonathan Stewart, DeAngelo Williams and Mike Tolbert the healthiest they have been in years.

Even upstart tight end Brandon Williams could see some action.

With all of the hype surrounding Newton’s passing targets, people are forgetting what makes Superman such a valuable fantasy commodity in the first place. Newton placed 30th in passing last season, yet took his Panthers to a NFC South division title. In 2013, Newton had just one game with over 300 yards passing, yet still managed a top five finish in fantasy scoring. So what do his weapons really matter?

Basically, if Cam Newton is your #1 quarterback, start him. Don't think twice, at least from health standpoint.

The last uncertainty worrying Newton owners is regarding his maturity on the field.

Cam Newton's rushing touchdowns have gone 14-8-6 in first three seasons. As QBs age, need to round out their game as rushing drops

Yes Newton will have to round out his game as he ages, but is year four an age mark to worry about? Four years in and a player is reaching his prime, not entering decline. The argument that Newton must leave the read option and focus on pocket passing so early has no foundation. Carolina will not shrink away from the read option, so stay loyal to the man running it.

Surgery was a success, a flack jacket will take care of the rib injury. And one could argue for Kelvin Benjamin over the 2014 version of Steve Smith. The negatives are simply overplayed  narratives. And with Newton’s value sliding down draft boards like John Travolta in Ladder 49, there is no reason not to bet on the man Carolina fans call Superman in 2014.