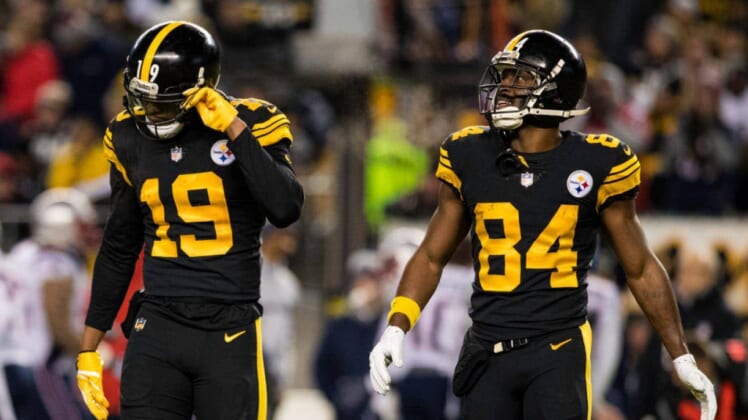 The war of words off the field escalated between the former teammates but Pro Football Focus likes the current Raiders wideout to best the Steelers new featured receiver.

There’s no question Antonio Brown is one of – if not the best – wide receivers in the NFL Today. But when it comes to fantasy football, what matters is the player’s opportunity to score points and the best player, in reality, doesn’t always win on paper.

Currently, PFF posted odds on total regular season touchdowns for both players with Smith-Schuster +175 to grab the most touchdown passes in 2019 and Brown the favorite at -220.

PFF said Brown would be a bigger favorite but the switch from Super Bowl champion quarterback to his new signal caller Derek Carr likely lowered his odds. The publication’s ranking (1-10) had Brown at a 9.5 touchdown receptions and Smith-Schuster at 9.3 – a razor-thin advantage. PFF said this is reason enough not to wager either way.

PFF also explored this offseason prop bet and said despite their view Brown might see a touchdown regression trend from 2018, the same will not hold true for receiving yards. With Brown the main target for Carr and Gruden, their projection has him at 1,419 yards next season.

At -110 on that bet with Brown, PFF says to book it with plenty of cushion based on their projection.